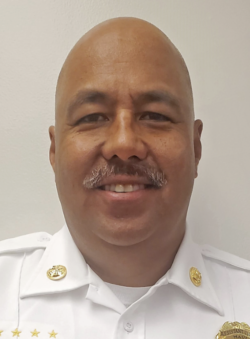 A Molokai member of the Maui Fire Department was among those to receive promotions recently announced by Fire Chief Bradford Ventura.

Lindo joined the Maui Fire Department in 1994. He served as a Fire Fighter I in Paia and Kahului. In 2005 he was promoted to Fire Fighter III and served as a Fire Inspector in the Fire Prevention Bureau. Lindo was promoted to Fire Captain in 2009 and worked in both Ho’olehua and Kaunakakai on Molokai. Promoted to Battalion Chief in 2020, he led the First Battalion. With his promotion to Assistant Chief, he will oversee operations for the entire department.

Lindo is a 1990 graduate of Kamehameha Schools Kapalama. He has served as an All-Hazards Incident Management Team Incident Commander and Liaison Officer, MFD’s Public Education Officer and served on the Molokai Fire Task Force and the Molokai Emergency Operations Center Community Team. Lindo and his wife Zhantell live in Ho’olehua and have eight children and 14 grandchildren.

All the promotions went into effect on or before Feb. 16.