Two Molokai High seniors got a quite a surprise two weeks ago. Little did Sarah Jenkins and Luke Kikukawa know that as they were sitting in their respective classes, a top secret mission was underway.

Sneaking through the halls of Molokai High with two giant, four-foot $10,000 checks, MHS Principal Stan Hao, Nordstrom Ala Moana Store Manager Brian Tatsumura, and other representatives and faculty stopped in front of two classrooms. They were preparing to make a big announcement: Jenkins and Kikukawa had each won a hefty check from the Nordstrom Scholarship Program.

“It’s sort of like a SWAT Team conducting maneuvers to take their opponent by stratagem in secret,” said Hao of the surprise operation.

Across the country, more than 45,000 students applied for a $10,000 scholarship from Nordstrom. Only 80 of those applicants receive the award, and only a handful are from the western region, which includes the West Coast, Las Vegas and Hawaii. Until last year, none had been from Hawaii as long as Tatsumura – who’s been working for the company for 40 years – could recall, he said. That changed when Molokai High’s Kilo Gonzales was honored with the scholarship last year.

Tatsumura said when he learned that Jenkins and Kikukawa received the award – not only from Hawaii, but from tiny Molokai for the second year in a row – he thought, “It’s unbelievable.”

“Just meeting them, we couldn’t have picked two greater people,” Tatsumura said of this year’s Molokai awardees. “What are the odds of two students from Molokai winning? They are both really deserving and it felt really good to give it to them.” 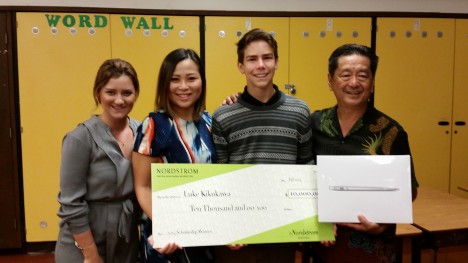 Hao said he notified staff by email, writing, “Lightning strikes twice and twice as hard!” referring to Gonzales winning last year, and both Jenkins and Kikukawa this year. He said both students have been recognized in national competitions and worked hard over summer breaks to pursue higher learning, which reflects well for the school as a whole.

“I think what it says about the school is that we have extremely hard working students and advisors who are directing them to scholarships and activities that make a difference,” Hao said. “We are also fortunate to have supportive parents and community who nurture them toward success.”

The initial application last year involved writing a personal statement. Jenkins said Molokai’s nurturing community is what inspired her essay in which she shared a Hawaiian proverb about how knowledge is absorbed by a child.

“I thought it was important to share where I’m from and who I am,” she said. “I wrote about my community and how they’ve impacted who I am and what I want to do… They really are the people who shaped me.”

Jenkins said she wants to go on to study environmental engineering policy in college – a field that involves ensuring the protection of natural resources when designing developments and engineering habitats that are friendly to animals, fisheries, food sources and watersheds, she said. 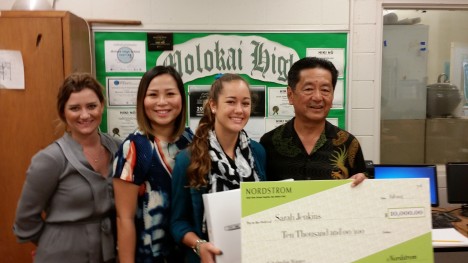 For Kikukawa, his passion lies in the medicine, and he said after finishing college, he plans to attend medical school to become an emergency room doctor.

“I like the travel opportunities and fast-paced job that keeps you on your feet, as well as helping others and see first-handedly the impact you make,” he said of working in the ER.

He said his personal statement talked about the obstacles students have on Molokai with limited resources, but how he overcame them by seeking out as many programs and activities as he could. One of those included spending two months last summer doing biomedical research at the lab of the University of Hawaii’s John A. Burns School of Medicine.

According to the program’s website, “The Nordstrom Scholarship Program wants to get to know you and understand how you approach academics, how you have had an impact on your community, and why education is important to you.”

After the initial application, students were narrowed down to a group of finalists, and Kikukawa and Jenkins participated in Skype interviews at the end of the summer with the Nordstrom selection committee.

That was the last the two had heard before getting surprised in their classrooms last month. In addition to the $10,000 checks, Tatsumura came bearing a Macbook Air laptop computer for both students.

“This is the first laptop I’ve ever had so now I don’t have worry about getting a computer for college,” said a grateful Jenkins.

She added that it’s a great feeling to be honored in this way.

“It felt really special because we’ve all worked together and grown up together [Gonzales, Kikukawa and Jenkins] and it was an amazing experience to represent Molokai and win a national scholarship,” Jenkins said.

For Tatsumura, he said he’s really proud of the Molokai students and their high school.

“It’s really good seeing kids excel – that’s what it all about,” he said. “Kids can do unbelievable things if they’re given the mentoring…. Every year I was waiting for someone from Hawaii to win.”

And now there are three.