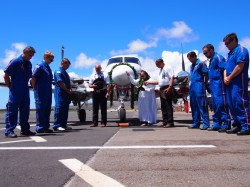 It usually signals unfortunate circumstances when Hawaii Life Flight (HLF) — an air ambulance service — arrives, but last week it was a celebration. The company has been offering emergency air medical transport on Molokai since 2006, and this year, made the island one of its bases. That means faster service for Molokai residents in need – and a better chance to save more lives, according to HLF staff.

“For all time-sensitive patients, like stroke, cardiac and trauma, every second counts… It can be life or death,” said flight nurse and Molokai base manager Josh Schroeder.

With the nearest bases on Oahu and Maui, the response time for HLF crew to arrive on Molokai for a call used to be between 45 minutes and an hour and a half, said Schroeder. Now, that time averages 15 minutes.

“If we can get to those patients faster, it increases their chances,” Schroeder said. “Every minute helps… We’re still doing the best we can to save as many lives as possible.”

The new base means that one of the company’s aircraft, two pilots and two medical staff are on-island and on-call 24/7. Schroeder said if the plane is currently taking a patient to an off-island medical facility, they have back-up coverage from Maui or Oahu.

The rotating staff of four medical crew and three pilots are dedicated to Molokai, said Program Director Dawn Guillermo. They have houses in Ranch Camp and the Heights in Kamiloloa, close to the hospital, where calls come in.

HLF staff said with crews doing almost a flight a day from Molokai, it was more cost effective – as well as better for patients – for the company to create a Molokai base.

“We’ve noticed the need on Molokai has been great the last few years,” said Guillermo.

“[Being on Molokai] it’s a more consistent, faster response with a dedicated team,” he said.

Last Thursday, the company held a blessing for its new base at the Ho`olehua Airport. Keiki from Punana Leo preschool offered oli, while kahu blessed the plane, pilots, crew and HLF staff as they move forward to serve Molokai residents.

HLF representatives also shared membership plans with attendees. The company’s `Ohana Plus Program offers membership to families for $30 per year if they already have medical insurance. Guillermo said for those without insurance, HLF membership is $60 per year.

Dawn Perreira, `Ohana Plus Program manager, said the price is well worth the peace of mind.

An HLF flight can cost about $10,000 and while insurance pays the majority of that cost, a family might be left with a $2,000 co-pay. Perreira said that cost, along with other medical bills, can be overwhelming.

“This is one thing we can help alleviate to give peace of mind,” she said. “We’re trying to help out the community.”

The $30 membership fee covers all the patient’s out-of-pocket costs for an emergency flight, according to Perreira.

She added that Molokai has a current membership of more than 700 families.

HLF has 90 staff statewide. The Molokai-based twin engine KingAir aircraft is medically configured and capable of transporting one stretcher patient, two medical attendants and one family member, according to their website.

One Response to “Life-Saving Flights”