The Native Hawaiian Library quietly serves Molokai, offering programs and resources to children and adults while enduring as a place of learning and discovery.

Located in behind the Lanikeha Community Center and the Ho`olehua fire station, the library is the only one of its kind currently operating in Hawaii. It features an array of Hawaiian resources together in one place. Program Assistant Nani Kawa`a said this allows for new discoveries about the history of the islands and a place to share these discoveries with others.

“Our books are being rewritten because of people looking closer at history and looking for actual documents,” she said, noting a presentation in January offering discoveries on Hawaii becoming a state.

A Resource for Native Hawaiians 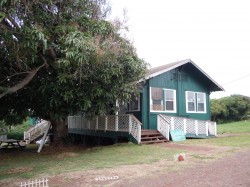 Kawa`a helps people prove Hawaiian ancestry through the library’s genealogy services. She delivers programs to Punana Leo immersion preschool. The library has maps of the island and Hawaiian historical documents. It offers literacy programs and cultural information. It also serves the area as a convenient library.

“People tell us they don’t go to the library because they can’t afford the gas to go into town,” Kawa`a said. That is why she keeps the library stocked with children’s books and also teaches community members how to use the Dewy Decimal system, which the library uses to classify and organize their books, so that people will know how to find resources when they go to the larger library in Kaunakakai.

She said the Native Hawaiian Library does not compete with the library in town. Instead the two work together to provide reading and resources to more people.

The Native Hawaiian Library operates under the organization Alu Like and is open to the public. It offers a collection of children’s books along with a large selection of books on Hawaiian culture, language, history and more.

“The library is also good if people are new to the island and want to be educated and learn about the culture,” Kawa`a added.

Alu Like placed these libraries across the state, but because they were located in isolated areas, they were difficult to staff, Kawa`a said. She has overseen the Molokai branch for about a year, keeping it running while others in the state close due to staff shortages.

Josephides helped start Molokai’s Native Hawaiian Library 28 years ago. He said he wants to set the library apart, get word out that it exists and inform communities about what it offers.

“It doesn’t mean opening your doors and waiting for people to come in,” he said. “We have to go out into the community.”

He said he wants to improve access to the library, including extended hours of operation. The library is open 18 hours a week and by appointment when people ask to come in. Kawa`a said anyone who needs to access the library’s resources can call her to make an appointment.

Because the library has a wide selection of books on Hawaii, Kawa`a said she is looking to expand its collection with resources specific to Molokai. She said she encourages anyone with worthwhile Molokai books, artifacts or resources to donate them to the library.

Josephides said offering more programs and services could strengthen the system and have it reach national standards for libraries. There is an online reference system in the making as he works to bring the library forward.