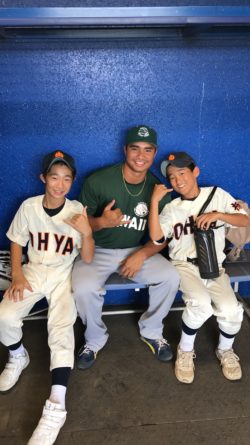 Molokai’s Levi Horner-Villa is returning to Linfield College in Oregon for his sophomore year and continues his collegiate baseball career with the Wildcats. Horner-Villa had a very successful freshman season and batted 286 with four home runs and 13 runs batted in. Linfield had a 30-15 overall record and they were 19-5 in the Northwest Conference and made the playoffs.

Over the summer, Horner-Villa had the opportunity to travel to Japan to play with Hawaii’s Island Movers baseball team and he said it was the trip of a lifetime.

“Traveling to Japan was very fascinating and I would like to say thank you to all whom supported me especially the ones who donated money towards my trip,” he said. “Japan was by far the most amazing trip that I have ever experienced in my life. As I traveled from bus, to train, to bus I was intrigued in the society and the way they functioned. I was absorbed into the Japan culture learning words, meeting new people, and eating new food that was amazing.”

Horner-Villa said he played baseball almost every day for almost a month while in Japan, while traveling the country and passing “beautiful sceneries from green mountains to rice farms that stretched as far as the eye could see.”

The citizens of Japan made a particular impression on him.

“I learned that Japanese people are very kind and respectful, and I loved that about them,” Horner-Villa said. “Before and after every baseball game we would sprint to the line to bow our heads to our opponents and umpires then shake their hands to show respect and gratitude.”

Among his best memories of the trip, he said local youth were especially supportive and enthusiastic.

” In the stands they would all be on the rails watching us take in and out and I vividly remember them yelling in amazement and clapping as we made each play,” Horner-Villa recalled. “When we were finished started to walk back to our dug out they would wave and shaka to us and we would all have big smiles and shaka back, some of the children along with me would take our hats off and raise them above our head with smiles.”

He said after each game, the children would sprint to the entrance to meet the players. Island Movers, along with their opposing teams, also got together and held camps to teach the sport to the young enthusiasts. Despite the language barrier, they used hand motions and communicated with some players who spoke English.

Horner-Villa also described the competition they faced while playing as “astounding.”

“The competition was amazingly good and being able to compete against them was a big learning experience,” he said. “I competed against the fastest D1 player in Japan and the number one pitcher in the D1 Japan league and it was amazing to see those two individuals preform but it was also amazing watching the Japan players all together.”

Coming from Molokai, Horner-Villa found familiarity in the deer that inhabited Miyajima Island. However, in Japan, they roam freely and are tame enough to come up curiously to be fed, showing no fear of humans.

“Japan all together was an amazing experience and traveling around from country to city to a small town while being with friends and doing what I love was all a blessing,” he said.