I have been in search of someone that is a mystery to me. I carry a picture that has only half a story. I’m hoping before it’s too late to find what I’m looking for – my biological father.

My mom and my biological father met in Taiwan in 1969. He came from a small island in Hawaii. Apparently he was stationed in Japan and went to Taiwan when he was on military leave, and they began a long distance relationship. On my first birthday, he came back to Taiwan to visit and take a picture with my mom and myself. His mother had even knitted a blanket for me as a gift.

They had a hard time communicating because she couldn’t speak English at the time. They started writing back and forth, and my mother used an interpreter to correspond. One day he sent a letter written in red ink, and in her culture it meant that it carried bad news. She was afraid to go and have it interpreted until many months later. When she finally had it translated, she found out that it was not bad at all. She sent a letter back, but by then it was too late, because he was probably angry and didn’t write back to her anymore. Eventually my mom married someone else and moved to the United States. All her belongings were thrown away, and she lost the letters.

She called him Joe (but I don’t know if that is his real name). Joe said he had to fly out from a really small island, and it took about forty minutes to get to the bigger island. I believe it was Molokai, but I’m not sure. I don’t expect too much, but it would be nice to know if I had family.

At first I tried not to wonder or care, but the space is still empty. He must have cared if he came back and took a picture with me. If anyone recognizes this picture, please contact me, Inga Vazquez at my email address ingav@central.kscoxmail.com. 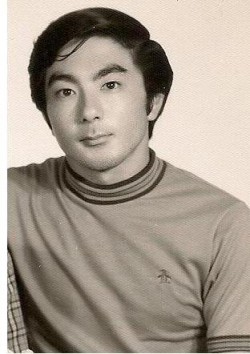