Lending a Hand to Puna 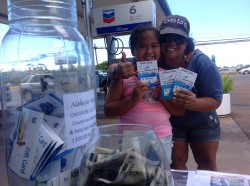 Last month, Tropical Storm Iselle struck the Puna district of Hawaii Island, knocking out power to thousands. Downed trees from heavy winds and downpours blocked roads, cutting off many areas of the rural district. In a response to the devastation, Kawika Crivello and Lori-Lei Rawlins-Crivello of Rawlins’ Chevron gas station organized the Aloha Puna Chevron Gas Card Drive which resulted in the Molokai community joining together to kokua Puna.

“That could have been us,” Crivello said. “Even though the ocean separates us, we’re connected. We saw families in need of help and that’s why we decided to do this drive.”

For five days, from Aug. 15 to Aug. 19, the gas station held a gas drive for Molokai residents to purchase $10 gift cards to donate to Puna families in need. A table and jar were placed at Chevron for Molokai residents to donate whatever they could. The gas purchased for the cards went towards powering generators, chainsaws and propane tanks for Puna residents. It also filled up tanks for families to drive and pick up donated supplies they desperately needed, such as ice, water and food. 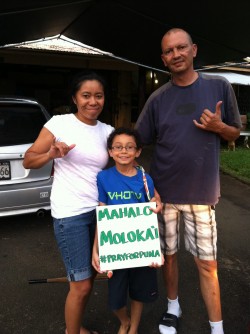 Crivello took to social media to get the word out, and by the end of the drive $5,000 was raised. Donations came from Maui, Oahu, California and even Australia, but 90 percent of the money raised was donated by Molokai residents, he said. About 400 Puna families benefited from the gas cards, according to Crivello.

Leiana Cretton, originally from Molokai and now a licensed marriage and family therapist in Puna, said she was without electricity for two weeks and used the gas card for her family’s generator.

“To have the warmth that Molokai showed Puna `ohana was very comforting and brought peace to a lot of hearts,” Cretton said. “This is such a small island that raised so much and that is a big thing.”

Cretton received her gas card about two weeks ago, and an additional 20 cards for her to distribute to other families in need. Daughter of Louann and Fred Reyes, Cretton said she understands Molokai’s strong value for community and spreading aloha. 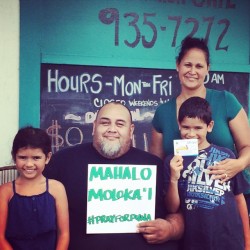 Crivello agreed, saying the act of helping others makes Molokai unique and thanks the community for doing this. He said he’s received an outpour of appreciation and thanks from Puna to Molokai through phone calls, emails and photos that are posted to Facebook and Instagram. Puna families are holding the gas cards or signs with the phrase “Mahalo Molokai” in the pictures.

“Some people [in Puna] can’t even wrap their minds around the gas card donations,” Cretton said with tears in her eyes. “Because we live in a low socioeconomic community, a lot of people don’t travel, so they don’t really know Molokai. It’s overwhelming for them to see this. It’s beyond words to explain the gratitude we have for the people of Molokai.”

Malcolm Helm and Loke Iaea Russell, both born and raised on Molokai but now living on Hawaii Island, distribute the gas cards. Kwai-Chang Publico, a close friend of Crivello’s from Hilo, coordinated relief efforts in Puna and also assisted in card distribution. All volunteers were excited to help and offer their time, Rawlins-Crivello said. 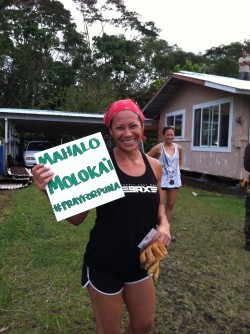 “I was able to bless the volunteers with the gas cards from Molokai, and the people affected,” Publico said. “The response from everybody is unbelievable. The volunteers were super humble because they came without expecting anything in return. The people, some cried, and they couldn’t believe that [Molokai] was reaching out to them. Every little bit is helping and is appreciated.”

Rawlins-Crivello said she’s not surprised Molokai joined together to offer relief to Puna. She said she hopes this drive will inspires others to coordinate efforts like this to share aloha, compassion and support of others.

“It’s awesome to see how this [drive] is affecting them positively,” she said. “We’re thankful here on Molokai that we weren’t affected and because of that we give and bless others because we can.”