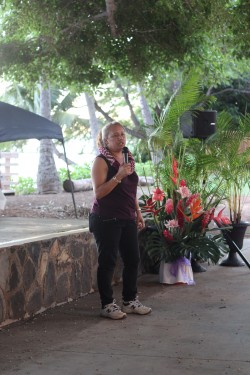 Committee members spoke with residents at Home Pumehana and met with homestead farmers at Lanikeha. They made stops that included Kaunakakai Elementary School, the Molokai Dialysis facility, the library and areas of coastline covered in mangrove.

Rep. Sylvia Luke, chair of the Finance Committee, said the most pressing issues they noticed were those of infrastructure, including health service needs, better plumbing at schools and rebuilding the library.

Because Molokai is such a small island, Luke said one of the things they’ve talked about is combining funding at different levels to address problems.

“Instead of saying this is the state’s problem or this is the county’s problem, why not pool our resources together and give home rule to Molokai to see if they can best use the money in their own way?” she said. “… Because it’s kind of a novel idea, it may not pass. But because we were able to talk to the people here, we can bring up that issue and highlight some of the problems you’re facing here.”

DeCoite added that education is a priority for her, and that one of the issues they discussed was air conditioning in classrooms. In Kaunakakai’s dry downtown, students and teachers can get miserably hot.

Luke said the Department of Education has designated Kaunakakai “as a priority school,” though DeCoite added there are still numbers to crunch and options to weigh in the air conditioning discussion.

“We gotta be realistic,” DeCoite said. “… You cannot give more than what the pie is. Once one school wants, every school going want. … It’s time for us to sit down, scratch some numbers, do some homework, and then go from there.”

In the evening, more than 200 residents gathered at the Community Health Center for dinner and a chance to talk story with DeCoite, Luke and other Finance Committee members, including Vice Chair and Rep. Scott Nishimoto, Rep. Ty Cullen and Rep. Jo Jordan.

“It’s nice for them to come over,” said resident Sharon Samonte. “It’s important that everybody hears our needs. We’re the forgotten island sometimes.” 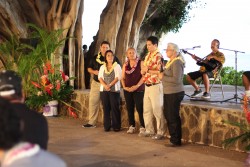 Rep. Jo Jordan speaks as members of the Finance Committee look on. Photo by Colleen Uechi.

Samonte added having a “Molokai-grown” representative is crucial for the community.

“We’ve known [Lynn DeCoite] since she was little,” said resident Lanakila Apuna. “It’s good to see her continually fighting for Molokai. … She’s the real thing. She tells you what she thinks.”

Lanakila and Roger Apuna said they felt one of the most important Molokai issues for legislators to consider is combating the drug problem through more prevention and rehab programs. They added that education is another important area.

“There’re so many needs over here, but a lot of people said, ‘We can try to go on because we know we’re a low priority,’” said Luke. “You guys are so used to taking care of each other that it’s ok in your mind if the state forgets about you, but that’s not ok.”