Leaving a Legacy of Faith

Well-loved priest to move from Molokai.

While most Catholic priests are known for their spotless black cassocks and distinctive clerical collar, Molokai’s Father Clyde Guerreiro is often found in work-worn denim overalls, a construction tool in hand. 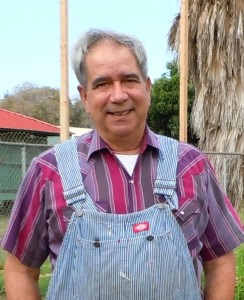 Father Clyde Guerreiro, standing at the current site of the new St. Damien Church before it was constructed. Photo by Catherine Cluett

Described by parishioners and community members as self-deprecating, down-to-earth, quick to laugh, a handyman and a visionary, Guerriero is fulfilling his childhood dream of priesthood. As a member of the Sacred Hearts order, he has been serving on Molokai for five years. But at the end of June, Guerreiro will be leaving the island, having been asked to re-build a Catholic community in Wahiawa, Oahu, and later, Tonga.

“He’s a builder, both in construction and in lives and communities,” said Sacred Hearts provincial superior Father Johnathan Hurrell, who made the decision to transfer Guerreiro.

Building the St. Damien Church is what Guerreiro is best known for on Molokai. The multi-million dollar structure had been in the planning stages for the parish since 1995, but after St. Sophia church burned in 2010, Guerreiro worked with parishioners to make the new church a reality in time for the Christmas Eve service in 2011.

The priest’s background in construction came from his father.

“We were very close,” said Guerreiro, who learned the trade working side by side in his dad’s business. Yet despite the working relationship he had with his father, Guerreiro described his childhood growing up in Pearl City, Oahu, as “divisive.”

“My dad broke the dinner table when I announced I wanted to enter seminary,” said Guerreiro. “He hated the church.” The young Guerreiro, encouraged by his mother, began seminary school at age 13.

“I’m what they called a ‘lifer,’” he said of his long-term commitment to the church. “I’ve always wanted to be a priest… When I was young, I wanted to be three things: a truck driver, a pilot and a priest. I did all three.”

But his religious calling took precedence, and Guerreiro rose to the top of his chosen vocation, traveling around the world as a provincial superior (and Hurrell’s mentor), a position he likened to a CEO of the Sacred Hearts order.

But he described the leadership role as “painful” and left it to return to the type of work he said he prefers – working, teaching and building faith communities. While the Sacred Hearts order usually assigns priests to parishes, Guerreiro said he requested to serve on Molokai, because he perceived it at the time to be economically depressed.

“From the time I was a kid – I’m almost 80 years old – we’ve had priests come and go,” said parishioner Fred Bicoy. “I felt sad… when I heard he was going to go – that’s the[closeness] we have.” 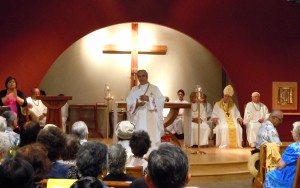 Molokai Work
Construction of the new church wasn’t the only reason he came to Molokai, Guerreiro said.

One of his goals was to establish a community of Sacred Hearts brothers and sisters on Molokai. Three sisters now live on the island and serve those in need.

“As my brother in [the Sacred Hearts] community… he always looks after us,” said Sacred Hearts Sister Jessie Kai. “He loves to tease,” she added, laughing. “Those are the things I’ll remember.”

Among other legacies, Guerreiro will leave are the adult Faith Formations educational study group as well as the strong youth ministry program on Molokai. Guerreiro said he has also forged good relationships with other local ministers.

Forging relationships is one of the things Guerreiro did best, and many say they will miss his presence, laughter and leadership on Molokai.

“When he first mentioned [leaving]… my heart went down to my toes. I don’t want to let him go,” said Kai.

“He doesn’t reside in isolation,” said Rose Brito, St. Damien Parish secretary and long-time parishioner. “It’s nice having someone who we can communicate with easily – he can make light of…things.”

Guerreiro’s ability to relate to his congregation is also what sticks out for Bicoy.

“I like his homilies because…even though [the scripture] was 2000 years ago, [he makes it so] we can relate to the word of God,” said Bicoy.

For Guerreiro, his most memorable moments include celebrating the canonizations of St. Damien “with bishops up the yin-yang,” and the groundbreaking of the new church.

“It was really a funeral, and from death came new life,” he said of the ceremony, which included honoring relics from the burned ruins of St. Sophia.

But he said his favorite memories may be of “the dumb things,” like the kids playing phone pranks on him.

“He’s brought a wonderful enthusiasm to all aspects of parish life,” said parishioner Maria Sullivan. “I will personally miss him.”

One of Guerreiro’s top priorities before he leaves is to finish construction of the new church, including a ramp between the church and the office building. He said the project has been put up for bid, but if the bids are too expensive, “me and the guys will do it ourselves.”

Looking to the Future
Guerreiro is leaving before the normal six-year term is up because a recent merger of Sacred Hearts Hawaii provinces has created a larger pool of priests to serve each area. Hurrell said he chose Guerreiro to lead the order in reviving Our Lady of Sorrows parish in Wahiawa, which has been inactive for over 40 years. But once the new parish is back on its feet after one year, Guerreiro is scheduled for an even bigger challenge: starting a Sacred Hearts community in Tonga.

Sacred Hearts was invited by the Bishop of Tonga, who is looking for presence of another order, Guerreiro said. He will conduct continuing education for young priests, and start a new parish for English speaking foreign-born residents.

“He is a rare person who is open to cultures and world views, and appreciates people of different… backgrounds,” said Hurrell.

While Molokai parishioners say they will miss Guerreiro, they are also hopeful for the future. Coming to serve the parish in July is Father William Petrie of Massachusetts, according to Hurrell. The priest has worked with Hansen’s disease patients in India for 25 years, where he worked closely with Mother Teresa of Calcutta.

Petrie spent six months on Molokai in 2000, during which pastoral council member Leoda Shizuma said she got to know him.

“He is truly a wonderful person,” she said. “He breathes St. Damien, which I believe is good for our souls here.”

Kalaupapa will also be getting a new priest. Sacred Hearts Father Patrick Killilea, a native of Ireland, will begin serving this summer, according to Hurrell. He will replace Father Ambrose Sapa, who is being transferred to Oahu.

“I’ve made lasting friends and have family here,” said Guerriero. “It’s not like I’ll never be back.”