Learning the Stories of Taro 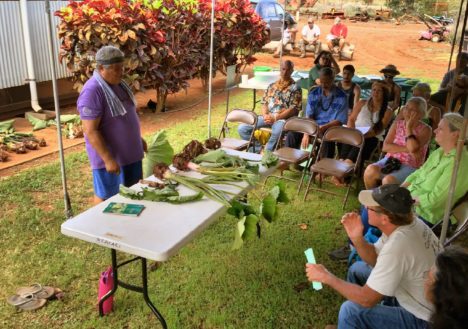 A quiet, attentive crowd of about 50 sat beneath the shade of a tent at the UHMaui College Farm the morning of Saturday, Sept. 17 as Jerry Konanui, of Hawaii Island, stood up to speak. Behind him, laid neatly in a row, were 15-= to 20 kalo plants, freshly harvested from the farm soil. He spoke about his lifelong passion for taro and preserving the nearly 80 varieties currently found in the Hawaiian islands. Picking up one of the plants with the careful attentiveness of a father with an infant, he held it up before the small crowd gathered for the Molokai Taro Variety Field Day.

“You know, I work with so many kinds of people with the PHDs and the Masters degrees, and they always ask me: ‘What is your title, Uncle Jerry?’ And I say to them, ‘You can call me Jerry Konanui, LPM.’ And they say, ‘What does that stand for?’ and I say, ‘It stands for lepo popolo maha’ai, the black dirt farmer,’” he chuckled.

Konanui, an eighth generation taro farmer and well-regarded expert on taro varieties, spoke about the many features that distinguish the different varieties of taro found in Hawaii today.

“And I always tell them,” he continued, ‘You can tell me so many things about the science and the soil of the taro, but can you tell me their story? Give me five minutes and give me the story! How you gon’ save them, you don’t know the story?’”

The annual kalo event began with exactly that: stories.

Alton Arakaki, Extension Agent for The University of Hawaii Cooperative Extensive Service, shared the significance and importance of continuing to document and preserve taro varieties in Hawaii. He also stressed the importance of growing carbohydrates to promote a balanced Hawaiian diet.

“We can get protein from the ocean and deer, but we gotta focus on the carbohydrates, he said. “This is the answer to many of the health problems that we see in native communities. The complex carbohydrates that the taro brings into the diet is really an important part of healthy living. We also need to go back and celebrate haloa and what this plant means to the native culture and all of this is what we celebrate today.”

Miki`ala Pescaia, Interpretative Park Ranger for Kalaupapa National Historic Park,spoke passionately about the role taro played in the lives of the very first exiles to arrive on Kalaupapa. The 12 or so resident families of Waikolu also shared what little extra taro they produced with them. She shared photos of residents of Kalaupapa over the years, and the tragic irony of their exile in order to save others from a disease, only to have them die, too often, from starvation. Her voice cracked as she spoke of one resident in particular, Kealohi, whose dying words in 1873 were “I wahi poi” — a little poi.

“I know we get criticized because we are vigilant, or is it vigilante?” she asked the chuckling crowd. “Sometimes it seems like maybe both. We are so vigilant about our resources. But if you come with one good heart, we gon’ feed you until you can’t eat no more. But no come take. If you come and feel entitled, that’s not OK.”

The field day also featured a Kalo Cooking contest, Kalo variety tasting, and Kulolo tasting.Finally, attendees went out into the fields with buckets and bags in hand, to harvest their preferred variety of kalo or huli to take home and plant.
For Konanui, this was a joyous sight to see.

“This is my passion,” he said. “I been on this since I was very young and my grandma used to raise me. I work to preserve the varieties, and today varieties are waiting to be discovered and brought home.”