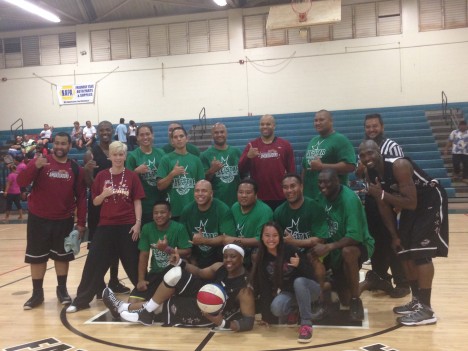 The Harlem Ambassadors pose with the Molokai All-Stars after a basketball show full of fun, laughs and slam dunks. Photo by Bianca Moragne.

The Harlem Ambassadors Basketball Team brought its positive message of pursuing an education, staying drug free and of course, basketball, to the Barn last Monday night for a spectacle of slam dunks and laughs.

Taking to the court in a charity game, the Harlem Ambassadors played the Molokai All-Stars, a team of volunteers from the fire department, police department and Friendly Market, in a game full of music, dancing and fun.

“Please stay in school, stay focused, be obedient, listen to your parents or guardians, the leadership that is before you,” said Lade Majic, coach of the Harlem Ambassadors. “Everyone can make it. I don’t care who you are but it’s your choice. I challenge you to choose the right thing.”

The quintet of basketball players thrilled a crowd of hundreds of Molokai community members with a basketball show, not a basketball competition. It is a show within a game, said Dale Moss, President and Executive Producer of the Harlem Ambassadors.

Several times during the showdown between the hometown team and the professional road team, the action would stop for dancing, pranks, jokes and even a brief game of Nerf football in the fourth quarter.

The Harlem Ambassadors are a troupe of 15 young men and women who played college basketball and met several other requirements. The squad travels across the U.S. and internationally to perform fundraising events for local nonprofits. The athletes selected to be among the Harlem Ambassadors have made positive life choices and serve as role models for youth, Moss said.

“To be an ambassador you must vow to be drug free and you must earn your college degree,” Majic said. “…I know some people have different feelings of the drug situation…but there are people addicted to these things and they can’t shake it. Never start, young people. If you never start, you never have to stop.”

Monday afternoon, the team joined Molokai High and Middle School students for an assembly to share their message, as well as personal stories from individual players, some of whom overcame great obstacles to reach their goals. The team also recognized the accomplishments of MHS senior Rizpah Torres-Umi, the only wrestler in the school’s history to be named a four-time Maui Interscholastic League Champion. During the assembly, Torres-Umi signed with Wayland Baptist University in Texas with a scholarship, where she plans to wrestle and study midwifery.

“When you put school first, commit to something and work really hard you reap the rewards. That’s what Rizpah has proved,” Majic said. She said Rizpah is an inspiration to everyone.

The Harlem Ambassadors were interested in coming to Molokai and emailed Molokai Chamber of Commerce (MCC) President Rob Stephenson about coordinating a visit in April. With the help of many statewide and local businesses, the team was able to visit Molokai for the first time. The game marked their 200th and last game of the 2013-2014 season.

Proceeds through sponsorships and ticket sales from the event will support the Molokai High School (MHS) athletics department and the MCC. Funds raised will pay off MCC operational expenses to bring the team to Molokai, and a sum will be set aside for the athletic department, Stephenson said.

Stephenson said due to a large turnout, more money was raised than expected and a notable sum will be granted to MHS. He also said he wishes a warm mahalo to supporters and sponsors.