Leading the Charge Off Grid: Organization runs on solar and wind

Molokai’s first smart-grid electric system is now powering nonprofit Ka Honua Momona (KHM). The Ali`i fishpond’s new office is a milestone for the organization and the island, demonstrating how rural development can utilize wind and solar energy to create electricity.

The system is off-grid, meaning KHM provides all of their own power. With the help of eight large batteries, the nonprofit organization can remain completely independent from Maui Electric even during extended windless and overcast periods. It is also a smart system, prioritizing essential appliances and automatically switching to a backup generator when all else fails.

Molokai engineer Bruce Yamashita oversaw design of the project. He said that while other off-grid systems exist on the island, the KHM smart mirco-grid is unique in its ability to identify the highest priority circuits and automatically monitor the level of energy going through the system.

KHM Executive Director Noelani Yamashita said Bruce, her father-in-law, was able to put into action forward-thinking ideas he had envisioned decades earlier as an electrician on Molokai. She said the office can serve as a model for what other organizations, businesses and individuals can do to remove themselves from fossil fuels.

“The KHM mission is to be a model of sustainability,” Noelani Yamashita said. “We have this office, and other people on the island can come and see how we do it.”

She said KHM can arrange tours of the system, and that the organization will even share grant ideas to help other nonprofits plan similar systems. She added that while it might not be feasible for the average family to install a system of KHM’s scale, they will help anyone learn how they can use various aspects of the system for their electricity.

“We think Molokai has some of the best sustainable thinkers around,” Noelani Yamashita said. “We can be a model for anyone who wants to have a smaller [energy] footprint.”

Bruce Yamashita explained that the high cost to connect to the power lines across the street led KHM to create the micro-grid system. They received grants to help cover the cost, and they receive free energy from the sun and wind.

A project proposal for the system stresses how this system can be used in remote island areas. Not only is it independent of power lines, but it also can be remotely monitored via Internet.

Plugging Into the Elements

The off-grid system features 16 photovoltaic solar panels that produce four kilowatts of energy, and two 400-watt windmills along with an energy inverter and battery storage system, according to the project proposal. The system provides electricity for the phone system, lighting, refrigerator, electric range, air conditioners, composting human waste system and high-speed Internet at the new office.

But what makes the system “smart” is its ability to preserve energy by prioritizing electrical items. Noelani Yamashita said there are three power categories, each contained on their own circuit and prioritized by the system. There are the critical items — those that must continually run — such as the refrigerator and network. There is a noncritical circuit consisting of computers, fans and other office equipment. Finally, large-power items include appliances that use the greatest electricity, such as air conditioning and outdoor maintenance equipment.

The smart system will ensure the critical items receive electricity at all times. It will also switch to a gas back-up generator to maintain any of the electrical equipment if battery storage dips too low. 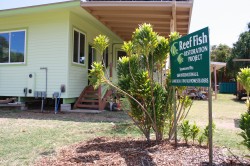 The new office at Ali`i fishpond is completely off-grid, running on solar and wind.

The inverter, which turns DC power into AC power – the type of electricity normally used in homes – has a large capacity. Bruce Yamashita said the inverter was the most expensive part of the system and is meant to accommodate future growth of the system.

KHM volunteer Bill Nickels helped with the wiring of the energy system. Nichols and his wife visit the island often from their Colorado Springs, Colo., home. He said he would help clear mangrove from the fishponds, and that when KHM staff discovered he had electrician skills, they pulled him from the water and got him wiring up the new power system.

Nickels worked alongside Mike Fairchild and Todd Yamashita to implement the system. Combined, volunteers put months of time to complete the wiring of the system, Bruce Yamashita said.

“Bruce is more or less the genius behind this,” Nickels said. “I did a lot of the wiring while Mike was doing the grunt work, like digging trenches and climbing under the building.”

Noelani Yamashita said without the volunteers, the office wouldn’t have electricity now.

Wholesale Solar custom-designed the system and gave KHM a nonprofit discount, Bruce Yamashita said. Rising Sun Solar installed the solar panels. He said there are plans to extend their sustainability by adding on solar water heating and a reverse osmosis desalinization system.