MHS student represents Molokai on teen council against meth use 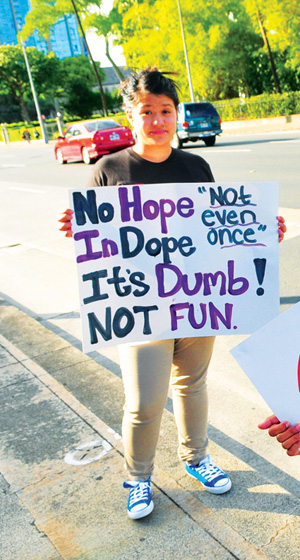 Hope Will shares a personal message at a sign waving event outside the Hawaii State Capitol on Oahu. Photo Courtesy Hawaii Meth Project.

It’s no secret that methamphetamines –commonly known as “ice” –has been a prevalent problem on Molokai. Meth is currently the top drug of choice and the number one drug problem in Hawaii, according to the latest assessment done by The National Drug Intelligence center.

But one student from Molokai High School (MHS) is taking action in the fight against meth use. MHS Junior Hope Will has become the first student from Molokai to serve on the Teen Advisory Council for the Hawaii Meth Project, a statewide campaign started in 2009 to prevent and reduce meth use across the islands, especially amongst teens and young adults.

“I feel like meth is a big problem on Molokai,” said Will. “People I see at my school every day are getting offered it. They think it’s fun to do with friends, but it’s not. You just end up destroyed.”

As a member of the Teen Advisory Council, Will is in charge of organizing events at MHS and within the community to spread awareness about the dangers of meth use. She is currently planning a sign-waving event, as well as a presentation for National Meth Awareness Day on Nov. 30. Last month, Will and 20 other student leaders from all across the state participated in a two-day summit on Oahu, in which they heard from guest speakers and legislators, watched promotional videos showing the dangers of meth use and learned how to better serve their individual communities as part of the Meth Project. 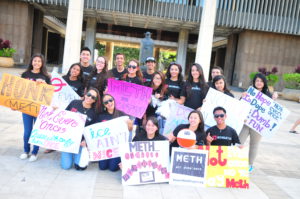 “We’re lucky to have Hope to spread the ‘not even once’ message to her peers and engage [them] with community activities to reduce meth use on [Molokai] and across the state,” said Colby Takeda, Program Manager for the Hawaii Meth project. The “not even once” message is meant to discourage young teens from trying meth even one time, due to the addictive nature of the drug. According to Takeda, 85 to 90 percent of people who try the drug even once will become addicted.

Peer-to-peer outreach, which is what members of the teen advisory council do at their individual high schools, is essential to the success of the Hawaii Meth Project, said Takeda.

“Adults are always going to tell you, ‘Don’t do drugs,’” said Will. “But if a friend says, ‘I’m not going to do this,’ there will be a good chance that someone else won’t do it either. One person can make a difference.”

For now, that one person is Will. She said she hopes the project gains support and volunteers from friends at MHS as well as the community.

“[Meth] destroys your body and your mind,” said Will. “That’s why I want to spread awareness –because I’d hate to see one of my classmates [dead] on the side of the road and know that I could’ve done something.”