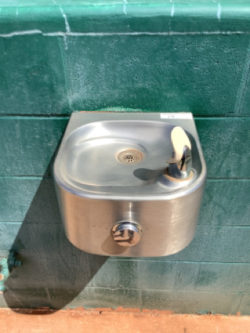 Left, a drinking fountain at Kaunakakai School and right, a faucet at Kilohana School both tested above acceptable levels of lead. Photos courtesy of Dept. of Health.

Water faucets and drinking fountains at schools around the state are being tested for lead content. So far, a faucet at Kilohana School has topped the charts for the highest lead content found in Maui County. Water sources with lead content detected higher than the project action level of 15 parts per billion (ppb) are no longer being used while monitoring continues.

About four percent of the water samples collected so far from faucets and drinking fountains at selected Hawaii public schools and child care facilities show elevated concentrations of lead.

The project, launched in February, is a joint effort between the Hawaii State Department of Education (DOE), Department of Health (DOH), and Department of Human Services (DHS). The project is part of a nationwide program established under the Water Infrastructure Improvements for the Nation (WIIN) Act of 2016 to test drinking water sources for lead from the faucets of classroom sinks and kitchen sinks as well as drinking fountains in schools and child care centers.

So far, 58 schools and 70 child care facilities in Hawaii, Maui and Kauai counties have been tested. Of those, 93 of the 2,232 sampled taps at schools show elevated concentrations of lead above the project action level of 15 parts per billion (ppb).

On Molokai, faucets and drinking fountains at Kaunakakai, Kilohana and Maunaloa elementary schools have been tested.

A sink faucet at Kilohana School in building A5 registered the highest lead content of tested schools in Maui County at 569 ppb. Another sink faucet at the school also exceeded the project action level at 22 ppb.

Kaunakakai School had one drinking fountain that had 125 ppb detected. Maunaloa School had no water exceeding the 15 ppb action level.

“The schools and child care facilities were notified immediately upon the receipt of the results and those water sources are no longer in use,” said Michael Miyahira, Acting Branch Chief of DOH’s Safe Drinking Water Branch. “We would like to assure the community that taps that had elevated levels of lead will not be used for drinking or food preparation until the problem is fixed.”

Facilities with lead concentrations that are below the project action level of 15 ppb have also been notified and have been provided strategies to minimize exposure such as daily flushing of the water, using certified lead-free filters, or turning the tap into a hand-wash only station, according to DOH.

Initial results indicate that faucet fixtures are the problem in most cases, but follow-up testing is occurring to define if the problem is the individual fixture or the premise plumbing behind the wall.

“It is important to note that any positive results do not mean there is lead in the water being provided to the school or child care facility from the public water supply departments,” said Miyahira. “Historically, our regulated water systems in Hawaii have not had lead contamination and our initial findings continue to support this.”

The DOE is creating a plan for replacement of affected fixtures or evaluation of the plumbing of schools where results showed elevated levels of lead.

This current project will test 106 DOE elementary schools and 123 DHS licensed child care facilities, which were selected based on criteria established by the Environmental Protection Agency. An application was submitted to the Environmental Protection Agency for additional funding to test the remaining 73 DOE elementary schools and 30 public charter schools in phase 2 of the project, expected to begin next summer.

Lead is a heavy metal that is naturally present in the environment and has been used for infrastructure, including pipes, according to the DOH. When lead gets into our bodies, it can harm the brain and nervous system. Long-term effects of childhood lead exposure include problems with learning, school performance, attention and behavior, as well as anemia and other health problems.

Children can be exposed to lead in many ways. Most exposures happen at home as the result of deteriorated lead-based paint or contaminated soil.