Mokulele’s promised larger aircraft are still on their way to Molokai, just later than planned. The first of two twin turboprop aircraft is currently being repainted, said Richard Schuman, executive vice president of Mokulele Hawaii. The 30-seat Saab 340 planes – brought on board by the company specifically to serve Molokai – will more easily accommodate wheelchair-bound residents and passengers of size.

The aircraft’s arrival has been delayed from the originally announced estimate of last fall. More recently, Mokulele said it was coming in January. Now, Schuman estimates it will be flying before the summer but doesn’t want to disappoint again.

“We’ve been wrong too many times to put a date on it, but it should be in the spring sometime,” he said. 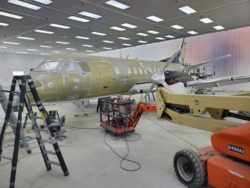 A lot has gone into the acquisition, and there is yet much to be done. The aircraft is currently being painted with the livery of Mokulele’s parent company, Southern Airways. That in itself has caused delays.

“The paint shop is blaming it on the supply chain and COVID,” said Schuman. “But they have everything they need now and the first one should be finished painting in March.”

After pilot training, the Federal Aviation Administration will join Southern Airways pilots on the mainland for “proving runs” — a lengthy process to show an air carrier is capable of operating flights —  as well as checks of the cabin attendants, which Schuman said is a new program for Mokulele because the new aircraft will have an attendant on each flight.

“Then the plane is ready to be sent over to Hawaii. I’m pretty sure we’ll have a party at the Molokai airport,” laughed Schuman.

The second 30-seat plane will be about one month behind the first one in arriving, he added.

“The plane will be specifically [for flying] Honolulu to Molokai – right now that’s our plan,” said Schuman. “It’s for the Molokai people – the only reason we’re getting this thing is for them.”

When ‘Ohana by Hawaiian pulled out of flying to Molokai in January of last year – leaving Mokulele as the sole air carrier to the island — the biggest concern for the Molokai community was transportation of wheelchair passengers and those weighing more than 350 pounds, which was Mokulele’s passenger weight limit at the time.

The airline acquired special lifts to assist wheelchair-bound customers and made changes to increase their weight limits, but ultimately, not everyone could be accommodated by the small, nine-seat Caravan aircraft.

“The only option was to get a new plane that they could fit in,” said Schuman. “[Southern CEO Stan Little] wants to be able to service the people of Molokai and Lanai, no matter what size or condition you’re in, as long as you’re medically able to fly with us [those who require special medical equipment such as IV or oxygen must fly in an air ambulance by regulation].” 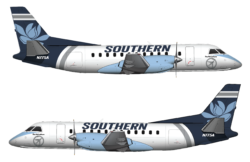 Depiction of what the new plane will look like after painting. Photo courtesy of Richard Schuman.

Fares will be comparable to currently offered flights.

Schuman said as of now, the plan is for a once-a-day round trip between Honolulu and Molokai for the larger aircraft, in addition to the current, frequent Caravan flights which take off from Molokai approximately hourly.

Other islands have other air carriers to choose from, but Schuman is acutely aware that Molokai only has Mokulele. He said his position allows him to be the go-between for Molokai residents and Mokulele’s leadership.

He describes his job as “being able to solve problems and being an advocate for the Molokai people.”

Anyone with questions or concerns can contact Schuman directly at r.schuman@iflysouthern.com.