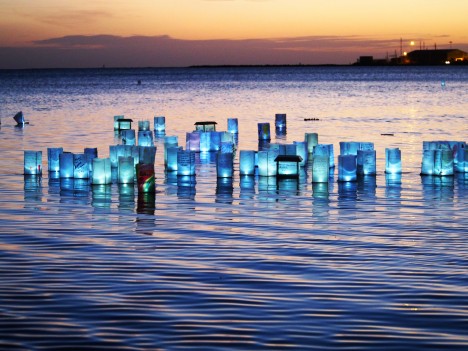 Decorated lanterns light up the surface of the ocean as part of Molokai’s First Annual Lantern Floating Ceremony. Photo by Catherine Cluett.

As the muted colors of dusk overtook a glassy ocean, hundreds of lanterns were set afloat, bearing messages of grief and loss, prayer and gratitude.  Ashore, a crowd lined the water’s edge. Some stood with heads bowed and hands folded, others with arms in embrace, toes buried in the sand, looking out to sea.

“Whatever healing they need, whatever losses they’ve experienced, they can write those messages on the lantern,” said Barbara Helm, bereavement coordinator at Hospice Hawaii Molokai. “It’s an opportunity to grieve openly – everyone’s coming for the same purpose. We’re all there in support of each other, without saying anything.”

Hundreds of residents released more than 200 lanterns made of wood and paper during Molokai’s first Lantern Floating Ceremony. A joint effort between Hospice Hawaii Molokai and the island’s Guzeiji Soto Mission, the event took four years of dreaming before it became a reality last Saturday at the Molokai Community Health Center Oceanside campus.

Helm said she saw Oahu’s annual lantern ceremony on TV and thought, “We could do this on Molokai.”  Both Hospice Hawaii Molokai and Guzeiji Soto Mission had wanted to organize it, but lacked the manpower. Finally this year, with the help of many volunteers, it began to take shape.

“We offer bereavement support for anyone who has suffered losses, and my role is to coordinate support activities,” said Helm. “This is for the community, for the whole island.” 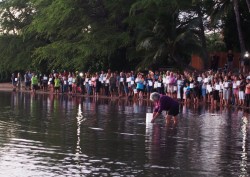 Molokai resident Barbara Helm, a Hospice bereavement coordinator and one of the organizers of the event, sets the first lantern afloat. Photo by Catherine Cluett.

Helm said she was worried about windy conditions and choppy water but the evening proved calm.

“We studied the moon, the stars and the tide charts … and scheduled it carefully,” she said. They also planned it when Oahu’s Bishop Shugen Komagata of the Soto Mission of Hawaii would be able to attend. He said he visits Molokai about once every two months to lead services at the island’s temple.

“This is a type of reflection on all the blessings we have received in the form of caring and support from those surrounding us… who have given us so much spiritual and physical nourishment,” said Komagata. “We are often so busy… we need to pause to say in writing something simple but special to let our [loved ones who passed, know our] feelings of gratitude.”

Earlier that evening, attendees decorated their lanterns, pouring out their hearts onto paper. While watching Moana’s Hula Halau dance as silhouettes against the sunset, some attendees shared with each other what the messages on their lanterns refer to, gaining strength from a common loss of loved ones and healing through recollection.

Helm said this type of event works well on Molokai, where, in a small community, confidentiality can be a concern in more intimate support groups. She said a larger, public event centered on healing is a good alternative for emotional support.

At the end of the evening, the floating lanterns were retrieved from the water by volunteers from the Wa`akapaemua Canoe Club. The papers portions will be dried and burned during a ceremony at the Soto Mission at the end of the month – a final release of prayer.

“We want to make sure that even though they’re gone, they’re never forgotten,” said Komagata. “We know the departed ones live in our hearts, but they also need to reach their spiritual shore of peace and joy.” 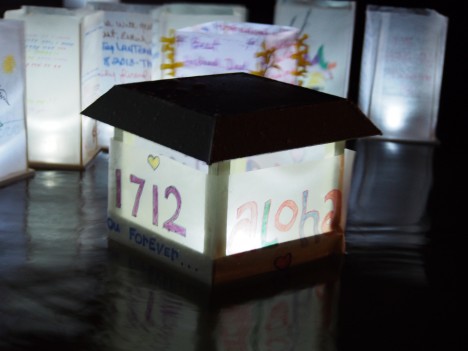 A drifting lantern honors the victims of Flight 1712, which crashed on Molokai in October 1989. Photo by Catherine Cluett.