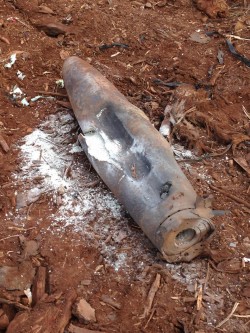 Photo of the ordnance discovered at the landfill, after detonation. Photo contributed anonymously.

“The ordinance was found during the sorting and separating of an older waste pile that consisted mostly of construction…waste with green waste mixed in it,” said Rod Antone, Maui County communications director.

The ordnance was from the 1940s, when military aircraft dropped practice bombs on some areas of Molokai for training, according to U.S. Army’s Staff Sergeant Corbin Heard with the 74th Explosive Ordnance Disposal (EOD) unit at Schofield Barracks.

After the ordnance was found, the Molokai Police Department contacted Heard’s unit to investigate the bomb. The unit arrived Tuesday morning.

Heard said the 500-pound concrete practice bomb had already been detonated years ago, but to ensure that no explosive material remained, he said he followed EOD procedure, which involved a controlled detonation.

The explosion was heard by neighboring residents.

One commenter on The Molokai Dispatch’s Facebook page suggested in the future, those nearby should be notified in advance so they know what to expect.

“Thought we [were] under attack!” commented another Facebook user.

By 10:30 Monday morning, the “all clear” was given for the landfill to reopen to the public, according to county officials.

After the EOD unit ensured the ordnance was safe to move and no longer a potential hazard, Heard said it is currently being stored in a safe location on Molokai until it can be transported off-island for disposal.

Heard said he has responded to reports of ordnance being found on Molokai twice in the past three years, but this was the first at the landfill during that time. But he said it’s common to find them when digging is involved, like during construction — or at the landfill.