Molokai Land Trust (MLT) has received the deed to Mokio Preserve, 1,719 acres of some of the most pristine and environmentally sensitive land on Molokai. The land was gifted by Molokai Properties Limited (MPL), also known as Molokai Ranch, in April 2008. 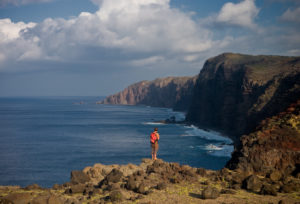 Shoreline up to Mokio Pt.

Mokio stretches along the north shore of Molokai between Mo`omomi Preserve boundary and the state’s Ilio Point parcel. The preserve encompasses five miles of remote and rugged coastline, with significant subsistence gathering areas and an extensive tidal pool system. The area has numerous koa or fishing shrines intact with offerings, as well as large ancient adze quarries. The ecosystem includes bird-nesting locations and more than an acre of `ihi `ihi lauakea, estimated to be the largest remaining site of this endangered endemic Hawaiian fern in the islands.

“Now we own the land, and we can expand our efforts to preserve and restore Mokio for future generations,” said Land Trust President Rikki Cooke.

In 2008, MPL signed a Letter of Agreement to transfer Mokio to MLT. Under the terms of the agreement, the Land Trust will retain ownership of the land in conservation in perpetuity. In 2009, MLT signed a 99-year lease so they could develop plans and begin land restoration. More than four years were needed to complete the subdivision and due diligence to complete the land in fee simple transfer.

An access system has been implemented for island residents, which supports traditional subsistence activities. In 2009, contractors were hired to report on the botanical, cultural/archaeological, and marine resources within the preserve boundaries. This information formed the basis for a long-range management plan, completed in 2012. Action has included documenting archaeological resources and removal of invasive species from these sites to prevent further damage to stone structures.

In 2010, MLT hired an EOD contactor to remove military ordnance in the Anapuka area, as well as all major trails, roads, and restoration sites on the preserve. MLT partnered with local schools to provide service-learning opportunities and introduce a part of Molokai that most students had never seen before. Development of a native plant nursery has enabled the organization to produce thousands of plants for its ongoing restoration projects at Mokio, and both children and adults are actively involved in the restoration work.

During the last four years, MLT has partnered with nine federal, state and independent organizations begin dune restoration at Anapuka near the Ilio Point boundary. MLT also partnered with the U.S. Department of Agriculture Natural Resources Conservation Service and its Plant Materials Center to restore wildlife habitat and reduce erosion on its interior lands marked by bare patches of red earth. The organization is now looking at protecting Mokio’s unique seasonal wetlands in partnership with the USDA NRCS.