The Molokai High School Lady Farmers Softball Team split a pair of games two weeks ago with the Lady Dragons from Hana and then won the series by taking the tiebreaker.

Amanda Venegas-Makaiwi went the distance for Molokai in the opener and picked up the win in an 11-5 victory.  Venegas-Makaiwi gave up five hits and struck out five in seven innings of work.  She walked six and hit one Hana batter.

A misplayed fly ball put the Lady Dragons up by a run in the top of the first but the Farmers took advantage of four Hana errors to score four runs without the benefit of a hit.  Molokai tallied five more runs in the third as Kelsie Espiritu-Tanabe opened the inning with a single.  Keala Kalipi followed by drawing a base on balls, Esther Lopez gained life on an error, and Kysha Kawano drew another walk to score Espiritu-Tanabe.  Khaylie Adachi followed with another single to drive in another run and Kapua Lee’s singled drove in the final run of the inning.

Molokai threatened to make it a short game when Lopez opened the fourth with a booming triple and scored on a fielder’s choice.  Hana came back with a pair of runs in the fifth when Venegas-Makaiwi walked the bases full and a single by Breeze Kalalau tallied a run.  Kawehi Sinenci was hit by a pitch to drive in the second run.

Hana scored two more in the sixth as Brittany Smith led off with a walk and Shalen-Brae Hoopai followed with a booming homerun making the score 10-5 in favor of the Lady Farmers.

Molokai added an insurance run in the bottom of the sixth without the benefit of a hit as Kysha Kawano gained life on a walk with one out.  Kawano later scored on an error.

Hoopai was charged with the loss for Hana and was relieved in the top of the fourth by Jaynalee Hoopai.  The two gave up five hits, struck out five, and walked eight in splitting six innings of work.

Kapua Lee’s two hits paced the Lady Farmer attack and Adachi, Espiritu-Tanabe, and Lopez each tallied two runs.  More importantly, at that point in time, the win moved the Farmer to the top of the MIL Division II standings.

Unfortunately for the Lady Farmers, the rematch saw Hana take an early lead, take advantage of some Molokai errors, come through with some timely hitting, and then hang on for an 8-6 win.

Molokai took an early lead in the top of the first inning on a pair of singles by Adachi and Venegas-Makaiwi and some aggressive base running by Venegas-Makaiwi and Kapua Lee.  Hana came back with a pair of runs in their half of the frame by making the most of a base on balls, two Lady Farmer errors, and a fielder’s choice.

The Lady Farmers tied the game when Espiritu-Tanabe walked to lead off the top of the second, advanced on a wild pitch, and scoring on a delayed squeeze bunt by Keala Kalipi.  Hana took control by scoring four runs in the bottom of the second.  The Lady Dragons spaced three singles between two hit batters and an error to take a 6-2 lead after two innings of play.

After Molokai tallied a run in the third when Venegas-Makaiwi got on via a fielder’s choice, advanced to second on a wild pitch, and scored on a single by Kapua Lee.

Hana two more runs in the fourth inning on an error, a single by Isley Pu-Akima, a hit batter, and a single by Katie Abreu.

Singles by Venegas-Makaiwi and Lee followed a leadoff walk to Esther Lopez and a fielder’s choice by Adachi to cut the Hana lead to 8-5.

With their backs to the wall, and the top spot in the MIL Division II standings at stake, the Lady Farmers mounted a rally in the top of the seventh.  Adachi led off with a walk and Lucy Wilhelm came in to pinch-run for Adachi.  After Wilhelm advanced to second on a wild pitch, Kiona English dropped a perfect bunt to put runners at the corners.  Wilhelm scored on an error but a fine play by Hana hurler Jaynalee Hoopai doubled up the runners to end the game, 8-6.

Hoopai went the distance for Hana to pick up the win.  She gave up six hits, walked five, and struck out four.  Venegas-Makaiwi pitched six innings for the Lady Farmers, giving up eight hits, walking two, striking out four, and hitting six batters.

Nahe Kapoi, Isley Pu-Akima, Kawehi Sinenci, and Katie Abreu all paired hits to account for Hana’s hits.  Venegas-Makaiwi helped herself at the plate with a pair of hits and three runs scored.  Kapua Lee also paired hits and drove in four runs for the Lady Farmers.

With the teams splitting the series, MIL rules dictate a new “game” for the series tiebreaker following international tiebreaker rules.  A coin toss put Hana at the plate first with the last batter in the lineup on second and the top of the line-up at the plate.

A great play by Lee on a foul pop-up close to the press box fence got the first out and a tough play by Adachi at second on a twisting fly ball garnered the second out.  Venegas-Makaiwi induced a fly ball to Lopez in centerfield retired the side. 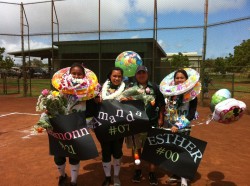 Molokai opened their half of the inning with Lopez on second.  Adachi worked Hoopai for another base on balls and Caylee Ledesma came in to pinch run for Adachi.  English dropped another perfect bunt and legged it out for an infield hit.  English came up limping and Wilhelm came in to run for her.  With the bases loaded and none out, Venegas-Makaiwi ripped a hard grounder into left field to score Lopez with the winning run.

The next weekend, the Lady Farmers took victory on Lanai at a pair of crucial games against the Pinelasses.  Now they await the possible return of St Anthony to play the game that was rained out last weekend to complete their regular season. The results of the weekend series with Hana and other games around the league left a tangled mess as to which team is on top.  All of the teams have at least two losses.  Most of the series that were split between two teams resulted in the tiebreaker, which might only come into play at the end of the season when all the games are completed.  At best, the Lady Farmers are in second, a half-game behind the Lady Dragons.