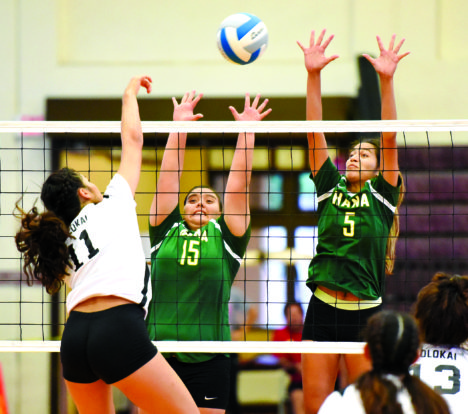 The Lady Farmers then advanced to the semifinals and faced the #2 seed Hana Dragons. Molokai played tough splitting the first two sets before losing to the Dragons in four sets: 25-18, 23-25, 25-20 and 25-18. Molokai finished the season 9-5.

“I am very proud of how we fought until the end of season, and especially at MIL’s,” Head Coach Mahea Rawlins said. “We always say, ‘Don’t go down without putting up a fight!’”

Rawlins reflected on the season, “I’d say this season went by real quick but yet it was long. With the addition of Waldorf it added more games which is great. However I think we needed to take advantage of those extra games. It’s hard when you play the other two toughest teams in the league and don’t have time to regroup. Our seniors played a big role this year and I’d say they did a good job. We are now looking forward to next season and good luck to Hana and Seabury at the state tournament.”