As the overtime clock ticked down to its final seconds, Molokai High and Seabury Hall were tied for the tenth time and the Maui Interscholastic League (MIL)Girls Division II Championship was anybody’s game.

The Jan. 25 championship on Maui could have been the last game for co-captains Tyra Lopez and Camille Borden, who are seniors finishing up their high school basketball career. 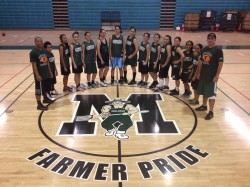 The win meant they got to continue playing, at least for a little while, as they prepared for the Hawaii High School Athletic Association (HHSAA) state championships, which are on Oahu Feb. 6 to 8.

“It makes the season longer,” Borden said. “This is our last year playing, so that means a lot.”

Thursday afternoon the players ran practice drills in the Barn, MHS’ gym, lining up in front of Coach Lee DeRouin before entering the court.

“The girls have celebrated. They understand the rewards of hard work,” DeRouin said. “In practice, the team crossed the line to put the MIL Championship behind them and put their focus and energy toward advancing in the state tournament.”

A Season to Bounce Back
Borden said practices like these are what helped the team improve from last year’s lagging season, the only time in Borden’s four years the team didn’t make it to states.

This was a distant memory for the players as they set their sights on the HHSAA tournament, where the 12 best teams in Hawaii will compete for the state title. The Lady Farmers won the championship in 2009, a first for both the team and the MIL. This could be the year that brings in another championship banner to proudly hang over the MHS high school basketball court.

“In a tournament format anything can happen,” DeRouin said. “We hope to continue to dictate the tempo of the game defensively and grow as players by working hard in practice each day leading up to the tournament.”

Borden and Lopez, along with players Hepuakea Falealii, Shaniah Mollena-Lopez, Tita English, Ilana Meyer and Lehiwa Pedro, took a break from Thursday’s practice to reflect on the MIL championship and look ahead to states.

The players were slow to boast about their MIL victory, expressing both excitement and humility. But they lit up with pride as they began to talk about their team dynamic.

There is no drama, they agreed. They don’t bring that into the team. Instead the players called themselves a big family.

“We’re a team,” Borden said. “There’s no specific or outstanding player. We all have jobs on the court. We have to work hard and together in order to succeed as a team.”

The team shared that their opponents may be physically bigger than Molokai players – they usually are – but what the Lady Farmers lack in size they make up for in speed.

They practiced against the boys’ team Thursday and held their own despite their size difference. Borden calls the team’s defense their strongest point.

During practice they were all smiles, joking with each other and laughing in between plays. They were serious about winning, though, and motivated by cultural and community pride.

The team said they were thankful for DeRouin, Athletic Director Hokulani Haliniak and their trainer for helping and supporting them along the way.

“The team would also like to give a big mahalo to all the families and Molokai fans that have supported the team throughout the season, especially at Maui High last weekend,” DeRouin added. “They were truly our sixth man and had the Maui High gym rocking.”

Read the exciting details of the MIL championship here: http://mauinews.com/page/content.detail/id/569302/Farmers-claim-D-II-title.html?nav=11