The Molokai Lady Farmers Girls’ Basketball team clinched their fourth straight — and their eighth out of the last nine — Maui Interscholastic League Division II Championship last Friday night in Hana, defeating Seabury 31-29. Senior guard Hepuakea Falealii led the way with 18 points for the Lady Farmers who finished a perfect regular season at 14-0. It was a hard fought nail biter game but the Lady Farmers held on for the win. 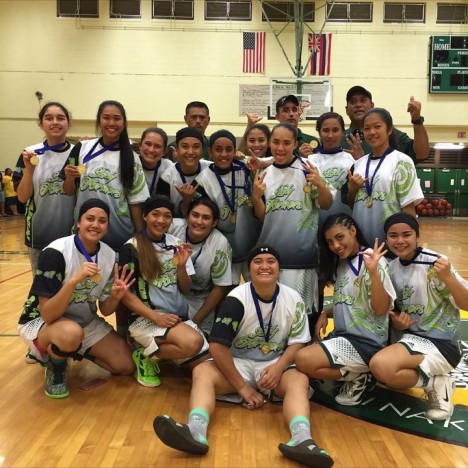 “I was so happy and proud of my team, I was speechless,” said Falealii. “Winning the championship has made me feel very accomplished. It also makes me realize that all of our hard work paid off.”

Coach Lee DeRouin was proud of his team’s performance.

“To be able to travel to Hana and rise to the challenge of playing teams with their seasons on the line and to come out on top was outstanding,” he said.

Hana High School hosted the DII Girls Tournament this year and the Lady Farmers wanted to thank them for their hospitality.

The team will only have a few days of practice before they head to Hilo for the state tournament this weekend. With their undefeated record, DeRouin is hoping for one of the top seeds and a first round bye in the tournament which should be announced soon. The tournament will be held at Kea’au and Waiakea High Schools on Feb. 10-13.

“Heading into the state championship, I plan on being humble and staying focused,” said Falealii. “We celebrated our win of the MIL title and now it’s time to get back to business. I am very excited and I look forward to making the best of the remaining time I have of my basketball career here at Molokai High.”

Honokaa, under Head Coach Daphne Honma, has been DII Girls State Champion the last two years and was runner up three years ago. Hawaii Baptist was runner up last year, losing in the Championship game 33-31. Kamehameha Hawaii was 3rd place last year and runner up in 2014. Molokai finished in 4th place in 2014.

The Lady Farmers are in a great position to have a positive result in this year’s Championship. They have practiced and played hard all year and are primed for a chance at a State Title. Molokai last won the DII State Championship in 2009 under Head Coach Doug Furlong beating Kamehameha Hawaii 45-42.