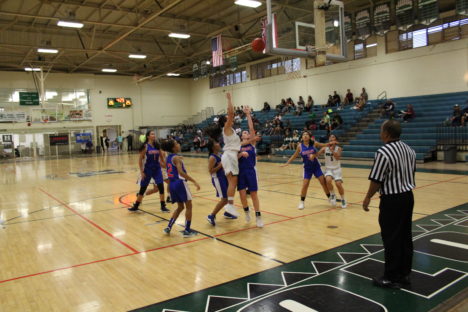 The Lady Farmers Basketball team got a well-earned split with the Seabury Hall Spartans last  weekend at The Barn. Both teams fought hard and put on an entertaining show in their two games. On Friday, the Spartans had a 25-24 lead at the half but pulled away in a close game to win 41-36 and improve their record to 7-0. The Lady Farmers were led by Sydney Rawlins with 13 points, while Kaitlin DeRouin added 11, Camille Ledesma had seven, and Tai-Li Tangatailoa had six.

On Saturday, Seabury again had a one point lead at the half, 15-14, but Molokai (2-4) had a good second half and won a close game 34-31 and handed the Spartans, now 7-1, their only loss of the regular season. Molokai was led by Rawlins with 10 points and DeRouin added nine. Seabury has clinched the regular season title and Molokai will finish their regular season this weekend with home game against the Lanai Pine Lasses.

“What a weekend!” said Molokai Head Coach Shane Mokiao. “The Lady Farmers played a great game Friday night and fell short, but coming into Saturday’s game we made some adjustments and played tough defense and that put us on top 34 to 31. All I can say is that we ate starting to play as a team and that’s good.”

DeRouin said both teams were up and up with each other the whole weekend.

“We kept the crowd on their toes,” she said. “We now gained more confidence going into the MIL tournament in two weeks by giving Seabury Hall their first loss of the season. As a team, we look forward to our last home games of the year next week at the Barn against Lanai and building more momentum into the MIL tournament.”

Seabury Head Coach Jonathan Furtado has his team ready for the MIL Tournament.

“I’m happy with our performance,” he said. “Our girls gave a great effort, and that’s all I can really ask for. It’s never easy to play in The Barn. The amazing crowd support is unlike any other in our division. The Lady Farmers are well coached with great senior leadership. This is our final test before the MIL tournament, and we’ve grown a lot on this road trip.”

This Friday night against Lanai will be senior night for the Molokai seniors  Ledesma, Rawlins, Tangatailoa, Shaelyn McCutcheon, Paula Maroto and Nairene Bishaw-Mokiao.

The MIL Girls Basketball Tournament will be held on Maui Jan. 25 and 26.