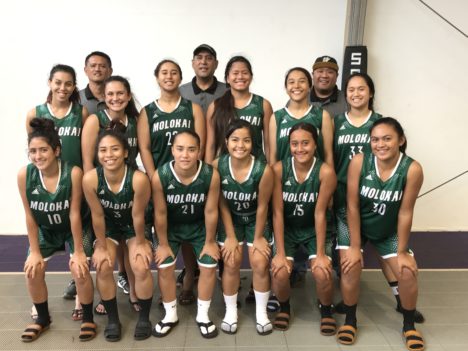 Despite losing the last three preseason games on Oahu, the Molokai Lady farmers performed well and came close to a win in their last two games. Photo by Natasha McCutcheon

In their first game of the new season, Molokai lost to a good Kamehameha (Kapalama) II team 40-25. Coach Mokiao was pleased with his team’s performance, “We gave up only 11 points in second half and the girls played great defense. The first half we just needed to get bugs out. Overall the girls played great.”

In their next game, the Lady Farmers faced another tough ILH team Punahou II and lost a close one 30-26.

“What a thriller! It was down to the wire with Molokai vs Punahou. With about 1:30 left, it was tied at 25, and both sides played good defense and we had a slightly controversial call that turned the game around and we fell short. But our girls played their hearts out and as a coach I was very proud of them.” Mokiao said.

In their final game of the road trip, Molokai played the hosts Hanalani and lost 31-22. Coach Mokiao was happy his team was in the game, “After being down by only 4 the entire game we had some mistakes that cost us, but our girls worked hard and played great defense.”

“We have lots of work ahead of us,” Mokiao said.

Molokai’s first regular season MIL DII game is on Lanai Jan. 5 and 6 against the Pine Lasses. Their first home game at The Barn is against Seabury on Jan. 12 and 13.