The Molokai High School (MHS) Lady Farmers softball team pounded out a 13-3 win over the Lady Dragons of Hana April 20 in the championship game of the Maui Interscholastic League (MIL) Division II Tournament at Patsy Mink Field on Maui.

The win came after a crucial make-up game against the St Anthony Trojans that the Lady Farmers claimed with an 18-1 win.

A gritty, come-from-behind 7-6 win over Lanai in the semi-finals of the league playoffs put the Lady Farmers in position to claim the overall league championship and in line for a bye in the opening round of the state championships. With the backs to the wall and facing elimination from the league playoffs, the Lady Farmers put it all together in the bottom of the seventh. 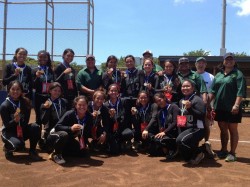 Amanda Venegas-Makaiwi drove a towering fly ball that was tracked down in foul territory to open the final frame. Singles by Kapua Lee, Karlie Martin-Galam, Kelsie Espiritu-Tanabe and Keala Kalipi scored a run to cut into the Lanai lead.  Esther Lopez, not completely recovered from a minor injury suffered on a diving attempt on a line drive earlier in the game, managed to put the ball in play to score Martin-Galam. With the winning run on third, Khaylie Adachi looped a fly ball into short center field that dropped in for a hit to score Espiritu-Tanabe and end the game.

The win advanced Molokai into the championship game and the loss ended Lanai’s season. At the championship game against Hana, The Lady Dragons took advantage of two early Molokai errors to tally a run in the first inning.  Molokai came right back in the bottom of the first with three runs of their own.  Kiona English’s hustle on an infield ground ball forced an error. Lee was credited with a hit on a hard ground ball into the hole between third and short. Venegas-Makaiwi was hit by a pitch to load the bases and Tai Yamamoto drove in two runs with a line drive into center field. Espiritu-Tanabe’s squeeze bunt brought in Venegas-Makaiwi.

The Lady Farmers increased the lead to 9-1 in the bottom of the fourth inning.  English and Lee got on board with singles and advanced on a passed ball.  Venegas-Makaiwi grounded into a fielder’s choice to bring in a run and Yamamoto’s single scored Lee.

Molokai shut down the Lady Dragons in the top of the sixth and closed the game out in the bottom half of the inning when Lee and Venegas-Makaiwi gained life on an error and an infield hit.  Yamamoto lashed a single to center field to score Lee.  Lucy Wilhelm came in to pinch hit and hit a spinning ball back to the pitcher.  Wilhelm hustled down to first and drew an errant throw allowing Venegas-Makaiwi to score and end the game.

The entire Lady Farmer team was backed by parents, grandparents, aunties, uncles, cousins and friends that joined more supporters from Maui.  The team will return to Maui April 30 for the HHSAA Division II State Tournament.