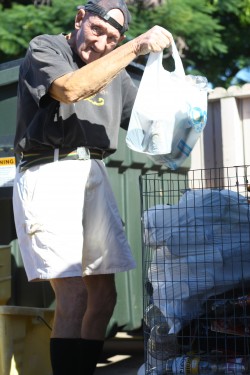 Irwin Millspaugh sorts through rubbish and recycles them into bins at Home Pumehana. Photo by Jessica Ahles

Every morning, at six o’clock sharp, Emma Velasco said she hears a rustling outside of her Home Pumehana cottage–“But ah, it’s only Irwin,” she said smiling.

Some call him Irwin, others call him “Urban,” but either way, Irwin Millspaugh, is regarded by residents as one of the most devoted residents in Home Pumehana. Every day he quietly pushes his cart, quickly shuffling along the sidewalk, as he plucks rubbish from the ground and sorts recyclables at Home Pumehana.

“Let me tell you something about that guy,” said resident Gwendolyn Gaspar. “I’ve watched that man every day and he picks up all the garbage in the park, he sorts through all the trash, I hear he even cleans washers downtown—and he always says good morning to everyone he passes.”

Originally from Montreal, Canada, Millspaugh came to Molokai several years ago after living on Oahu. He said he’s always had a habit of cleaning his pathway but considers rubbish picking a hobby rather than chore.

“I always enjoyed working for a living,” said Millspaugh. “I’m 85 years old and I know I’m not getting any younger, but I put my heart into this.”

Today, he puts his heart into making Home Pumehana and Kaunakakai a cleaner place, however, he used to put his entire body into it.

“He even used to dive into the dumpster if he saw stuff in there that was supposed to be separated!” said resident Linda Liddell.

Though Millspaugh’s dumpster diving days are done, he still does more than just take out the trash.

One day, a resident got stuck in her wheelchair after her wheels became tangled in some vines, said Gaspar. When he saw her struggling, he went over and pulled her out.

“If the kupuna bring their [shopping carts] from the grocery store, he’ll take [the carts] all the way back to the store for them,” she added.

In his spare time, Millspaugh said he enjoys watching TV, dancing and even learning foreign languages.

Over the few years Millspaugh has lived on Molokai, he has become a loved and cherished member in the Home Pumehana community.

“I want to cry because I haven’t seen a guy more precious that does so much for this place,” Gaspar said, misty-eyed. “He’s such a wonderful man and I wish there were more people just like him.”