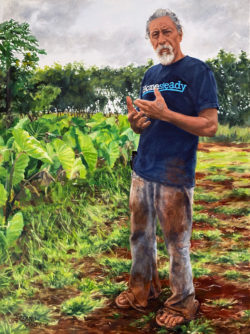 A series of portraits painted of Molokai kupuna seeks to capture more than just a picture. Fifteen oil paintings of hulu kupuna, the island’s most esteemed elders, have been painted by artist Vonnie Brenno Cameron, in collaboration with Molokai based nonprofit Hui o Kuapa led by Maile and Hanohano Naehu. Each portrait, captured during talk story sessions over the past several years, tells a story and speaks to the mo’olelo held by the kupuna.

Na Hulu Kupuna Project began four years ago, when Cameron, a kanaka maoli painter living in California, sought to reconnect with her great grandmother’s roots on Molokai. At her 50th Punahou High School reunion, a classmate living on Molokai offered to reach out to make some connections. One of those connections was with Maile Naehu. Maile and Hano offered to make some calls but stressed it would be up to each kupuna if they would allow their portrait painted. The project evolved as a “beautiful experience” that included a video portion capturing the legacy of Molokai’s kupuna and their wisdom so it can remain in perpetuity, said Maile.

“These paintings that were done are just so in the moment, and so genuine, and we tried to capture them in their element… talking about the things that make them hulu kupuna,” Maile explained. “It was really emotional at times because it would conjure up these memories from their childhood and how these practices that they’re experts at aren’t really the same anymore because the resources aren’t the same anymore.”

Hano helped make the connections with kupuna he knew well, as well as those in the community he wanted to learn more from – selecting a diverse group from fishermen to paniolo to cultural practitioners to farmers.

“These practices, these stories, need to be carried on — that was inspiration behind the project,” continued Maile. “These kupuna aren’t going to live forever, we need to make sure we capture these moments, give our children the experience to learn from them.”

After making several trips to Molokai and photographing portraits during the talk story sessions, Cameron translated the photos into 15 oil portraits, 20 by 24 inches in size, completing the project this spring. 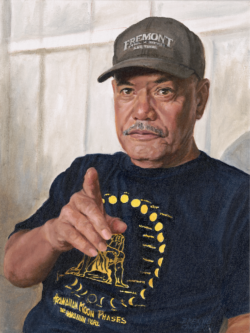 “I’d never even been to Molokai when I started this so it was a way for me to connect back to where my ‘ohana is from,” said Cameron. “It’s really wonderful because the whole island feels like family to me. Everyone feels like they know each other and such a strong community of people that help each other and are there for each other, that’s so rare today. I’m so honored that so many people opened themselves up to me… I really appreciate the people of Molokai and very honored to be able to paint them.”

Cameron was born in Tokyo, Japan and moved with her family to Oahu when she was seven. She attended Kamehameha in middle school, and Punahou during grades eight to 12. Her love of painting began early, and she attended the Honolulu Academy of Arts, selling her first portrait at age 15. When she moved to Los Angeles in 1970, she said the Hawaiian Renaissance had not yet begun, and even at Kamehameha, the language wasn’t taught. During later visits back to Hawaii, she was excited when she began noticing changes and heard ‘olelo Hawaii being spoken. In 1978, a dream was sparked to paint portraits to keep the Hawaiian culture alive, and more than four decades later, it has become reality.

Cameron’s gift for portrait-painting shines in the way she captured Molokai’s kupuna.

“I was inspired by the idea, ‘How can a painting capture the immortality of the story?’” explained Maile. “The portraits really inspire a deeper conversation about the power of portraiture… the little details that reveal the stories.”

Like the way Aunty Mary Hala Pale is “standing along the coastline she grew up – in that moment, she is reflecting on how much it’s changed, the bittersweet of what it used to be but trying to hold on,” said Maile.

Like the way Uncle Bobby Alcain is stained with red dirt, or how Uncle Mac Poepoe’s shirt reflects the moon phases and how he speaks with his hands, “really capturing his character,” Maile commented. 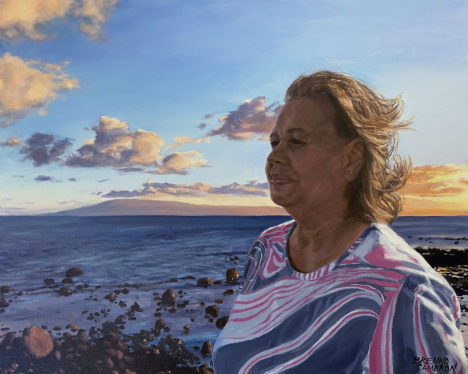 On May 25, Cameron, along with members of Hui o Kuapa, will visit Kualapu’u School fourth and sixth grade Hawaiian language immersion classes to hold a portrait art workshop, teaching lessons reflective of the mo’olelo of the kupuna.

The following day, the portraits will be unveiled at an honorary luʻau for the featured kupuna and their ʻohana, where Cameron will gift each kupuna with their portrait.

On May 31, a virtual premiere of the gallery will be available to the public online.  Development of a virtual art gallery has been done by Sonja Angst, Molokai native media and marketing artist. Kahale Naehu-Ramos filmed and produced video footage that will also be available online, and photographer Kapili Naehu-Ramos assisted with documentation and interviews. Visit huiokuapa.org to view the exhibit.

Cameron said she’d love to continue and expand the Molokai portrait project. You can reach her at vonniecameron@gmail.com or through her website, vonniebrennocameron.com.