Kupu A`e: From Garage to Storefront 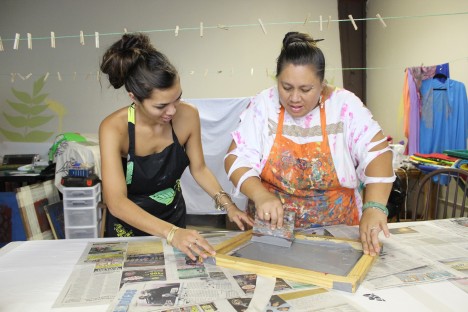 Sisters and business partners Leimana Ritte-Camara, left, and Kala`e Tangonan, right, silkscreen a tie in the studio behind their new shop. Photo by Colleen Uechi.

Sitting in her brand-new work studio, local business owner and artist Kala`e Tangonan talks about the Hawaiian mamo. The long-beaked bird, which ali`i prized for its feathers, went extinct more than 100 years ago, a fact that both saddens and inspires Tangonan.

“I thought, ‘I’m gonna make me a mamo,’” Tangonan said, gazing at a line of hanging pareos freshly silkscreened with her hand-drawn mamo. “People can wear him and he can come back alive.”

The desire to weave cultural heritage into art is reflected in the motto of the new business that Tangonan shares with her younger sister Leimana Ritte-Camara and friend Miki`ala Pescaia. Kupu A`e Molokai, LLC, opening soon at Holomua Junction, touts clothing and accessories that are “Kupuna inspired, wahine desired.”

“All our `ike, all our knowledge, it comes from who we are as Hawaiian people, and we try to portray that in our art,” said Ritte-Camara. “… Every art piece, every design, is things that we’re connected to somehow.”

Although Kupu A`e became an official business just last year, Ritte-Camara said she and Tangonan have been making and selling creations out of Tangonan’s garage for nearly a decade. It was the business-savvy Pescaia, said Tangonan, who first suggested that they turn her pastime into a serious business. Together, the three founded Kupu A`e, and took their wares to such craft fairs as the Made in Hawaii Festival and the Made in Maui County Festival.

Wanting to separate work and home life, they decided to move to the location at Holomua Junction – the business center at the corner of Maunaloa Highway and Kalae Highway. Their shop next to Beach Break features shell jewelry, men’s ties, batik scarves, baby blankets, Hokule`a-inspired wear, art supplies and more. According to Ritte-Camara, no two items are the same. The sisters don’t use set measurements when they mix colors, making them nearly impossible to duplicate.

The sisters explained that during the years they worked out of the garage, the community was continually supportive. Friends donated boxes of fabric, cartons of beach shells and cans of paint. Neighborhood kids painted prayer flags side-by-side with Tangonan and her children. Now the owners of Kupu A`e hope to return the favor in their own way. They envision their studio, which is connected to the main shop, as a place where people can create art or seek help creating it, whether it’s shirts for personal use or centerpieces for parties. They’re also considering offering a monthly membership that will allow members to come to the shop and do art whenever they choose. 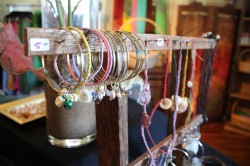 Both women added that it’s a struggle balancing kids and a budding business. Tangonan, Ritte-Camara and Pescaia all have children, ranging from high school-aged kids to toddlers.

“We’re just trying to be stay-at-home moms and at the same time run a business,” Ritte-Camara said. “We don’t wanna be rich or anything. We just want to provide for our family.”

Products are ready for sale and the business has already had a blessing ceremony, but the owners won’t have an official opening and set hours until after Pescaia returns from a trip to New Zealand this week.

Tangonan, who has a bachelor’s degree in arts from the University of Hawaii-Hilo, said a college counselor once told her that art as a business would never come to Molokai and advised that she seek work on other islands. But Tangonan found a way to make it a reality on her home island.

“As soon as went to school, I loved it,” she said. “I knew that’s what wanted to do for rest of my life. Whatever it was, however I did it, I [would be] fine.”

Kupu A`e is now the fourth business at Holomua Junction, 11 acres of property that Diane and Larry Swenson bought in 1988 and developed into a small retail center. They later moved their own business, Swenson Real Estate, onto the property in 1994. To them, it was a good alternative location to downtown Kaunakakai, which is often cramped for parking and is in a flood zone, said Diane Swenson.

“Businesses are safe up there and there’s lots of parking,” she said. “We envisioned it as sort of a safe haven.”

The next business to open at Holomua was The Tobacco Shack, which owner Ka`ili Adachi moved from downtown to the Junction in 2012, although she still owns a sister store, Da Hot Spot, on Kaunakakai’s main street. The Shack offers snacks, drinks and specialty smoking accessories. Beach Break, a surf shop owned by Zachary Socher and wife Wendy Doenges, opened earlier this year and features boards of all kinds, clothing, teak furniture and printing services for photos and posters. The Junction also includes the office for a University of Hawaii program that works to protect rare and native plants.

According to Diane Swenson, there are still two spaces available, and Adachi said she and Swenson are working together to recruit more tenants. Holomua Junction’s location by a highway funnels drivers from all parts of the island, offering prime visibility, but it is also a place that many people speed past, as Ritte-Camara pointed out.

“It’ll take a little bit of time, but I think people will get in the habit,” said Diane Swenson. “Some people don’t know what we have here. They have to stop and check it out.”