Kuleana in Action at Homelani Cemetery 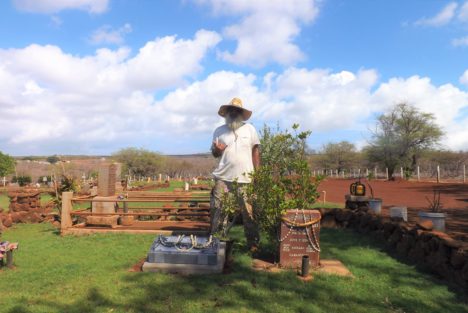 Out of the red dirt, a veritable eden has sprung up at the Homelani Cemetery. Molokai resident Richard Cabanting has been working this soil, transforming it. His work is a testament to a son’s love for his mother.

In his military fatigues, wide brim hat and long beard, Cabanting has the look of a man on a mission. This mission started five years ago, the night he returned home to Molokai.

That night while sleeping, Cabanting said he had the extraordinary sensation of being held, embraced by “two hugs.” It was an other-worldly message that he couldn’t ignore.

“You know where you got to go,” Cabanting’s brother told him the following day.

So Cabanting went to the cemetery. First to Kapa’akea, to see his father and uncle, and then to Homelani Cemetery to see his mother.

“When I came up here everything was dirt and weeds,” said Cabanting. “It was meant for me to take care of them.”

The project quickly spread to include more people who had taken care of Cabanting in their lives. Finally, it became clear that the mission would include the entire cemetery.

For Cabanting, this project is about reciprocal responsibility: kuleana. It is a chance to take care of those who once cared for him.

The work has also been an opportunity for further discovery and insight into Cabanting’s own family, he said. Having found the graves of his great-great grandparents in the process of rejuvenating the cemetery, Cabanting is now able to create complete genealogies for his family. He also was able to meet new members of his extended family who came to visit the graveyard, he explained.

No longer alone in his effort, Tara Horswill, through the Molokai Occupational Center in conjunction with the Department of Hawaiian Home Lands, works alongside Cabanting. The real gift of Cabanting and Horswill’s work is that the cemetery has become an inviting space for people to enjoy.

The cemetery is an arresting combination of “the unseen and the seen” for Cabanting. A moment in which two worlds can connect.

With only a small section of the cemetery remaining in its previous state, Cabanting and Horswill are close to finishing the project. Amongst the recently planted plumeria trees and crown flowers, a Hawaiian state flag blows in the wind — a fitting visage for a sacred place.