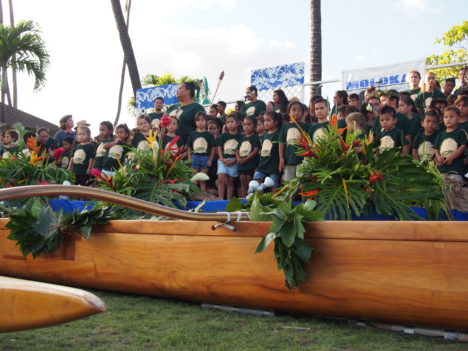 Molokai’s Kelson “Mac” Poepoe, a well-known community leader, natural resource manager and fisherman who has worked to preserve the Mo`omomi area, was honored with the event’s annual Ho`oilina award. A special guest, renowned Hokule`a navigator and Polynesian Voyaging Society president Nainoa Thompson, came from New York — straight from the vessel’s Worldwide Voyage — to present the award. He called Poepoe “a great man and a great friend.” 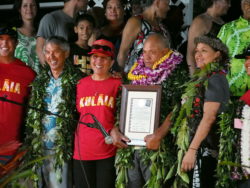 Thompson recalled walking along Mo`omomi with Poepoe decades ago.

“This was before the Department of Land and Natural Resources recognized his work and his connection to place and the ocean and designated the first — the first — community based marine conservation area ever in Hawaii,” Thompson said. “Today, it’s inspired like 25 different places in the state of Hawaii through the recognition that government by itself cannot protect what we love… it takes community.”

Thompson said he saw Poepoe again before departing on the Wordwide Voyage to spread a message of malama honua — caring for the Earth — and how Poepoe’s example inspired him to take on the risky endeavor.

“It’s a privilege and honor… to acknowledge in my mind, one of the world’s really great navigators,” said Thompson of Poepoe. “The one by himself, set a course, set a vision, found a destination, went through all the challenges, kept doing it and inspired so much greatness in the possibilities of protecting the oceans.” 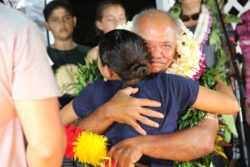 Poepoe was showered with lei from family members and spoke of the feeling of being recognized on his home island, after receiving many statewide honors for his work.

“I talked to my wife and I told her, ‘You know something, for all the awards I had, this one means the most to me,'” he said. “The reason for that being, this is from my own community, this is from Molokai, not from someplace around the world, from some place where people don’t know me. This is from right here.”

Council member Stacy Helm Crivello also presented Peopoe with a resolution on behalf of the Mayor’s office and the Maui County Council.

“You are the embodiment of humility, wisdom that transcends years and a true essence of pono,” the resolution reads. “Your reverence for the ocean, aina and the once abundant resources that blessed us are truly inspiring and encouraging….”

Kulaia is part of an effort to build positive relationships between paddlers and the Molokai community, be good hosts to the annual races as well as provide a platform for education about Molokai’s fragile environmental resources. One of the event’s organizers, Lori-Lei Rawlins-Crivello, said the event also helps stimulate the island’s economy by encouraging visiting paddlers to come into town and support local vendors.

Thirty-five Molokai crafters, jewelers, clothing designers and other artisans sold their products at the event, and a “cultural row” offered educational booths and free lomilomi demos. Food vendors filled the stomachs of attendees with favorite local dishes and a selection of hula and musical entertainment awed the crowd. Famed Hawaiian musician Willie K even gave a special two-hour performance when some of the musical line-up couldn’t make it.

Kulaia is short for La Kulaia, which used to signify days of festivities to honor our beloved kingdom and monarchy, said event speaker Nahulu Maioho.

“During the Hawaiian Kingdom era, La Kulaia usually took place as a national holiday, where our kupuna would celebrate… days [at a] time, celebrating our mo`i, our beloved kings and queens of old,” he said. “Historical records note that the Hawaiian outrigger canoe competitions were one of many events that took place during annual La Kulaia.”

Today’s Kulaia festival is an effort to restore that tradition, as well as offer solution-based ways to address a modern challenge.

“Our councilwoman, Stacy Helm Crivello, played a huge role in igniting this effort about four years ago when she convened a group of concerned fishermen, activists, DLNR and canoe race organizers bringing them to the table to address the huge concern of escort boats raking our ocean resources during these big races,” said Rawlins-Crivello, via email. “Through that effort, we saw an opportunity to bring forth ideas of bringing back the spirit of the festivals we remembered some 40 years ago in Hale o Lono.”

She added that the event, which included closing Kaunakakai’s main street, couldn’t happen without the help of many community volunteers, organized and assisted by the Molokai Canoe Festivals Committee. She said once the street shuts down, the crew has only one to two hours to set up a massive backdrop, tables, booths and decorations.

“I was pretty shocked when I walked around the corner to see essentially the whole of Molokai here,” chuckled Thompson. “You’re… the power of community, that’s come together to create this amazing unified celebration of who you are, what you believe in and what you stand for.”