As one of Molokai’s longest-standing and most successful farms, Kumu Farms knew they were headed in the right direction. Over the past 30 years, they have become the largest exporter of organic papaya to the U.S. mainland, according to owner Grant Schule. About four years ago, they expanded their market to serve the local community, offering residents and visitors of Molokai a variety of organic produce fresh from the fields of the 120 acre-farm in Ho`olehua. 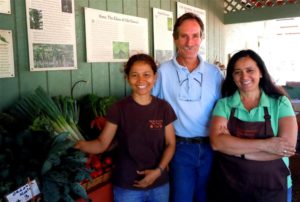 Their efforts were confirmed last month, when Kumu Farm’s commitment to agriculture and the community won them two awards — Edible Hawaiian Islands Magazine’s Local Heroes farm category, and the County of Maui’s Exceptional Small Business Award. Both accolades were based on consumer feedback – being compared to larger farms around the state and county made it a David and Goliath story, said Kumu Farms marketing director Emanuela “Manu” Vinciguerra.

“We’re exceptional for having survived on Molokai for 30 years,” said Schule. “We always thought that we were doing the right thing, but it’s nice to be recognized, not just patting ourselves on the back.”

Only relatively recently did Kumu Farms establish themselves in the local market. Before that, their business revolved around export – which continues to be their main source of revenue.

From Here to Chicago
Every week, the farm harvests about 20,000 pounds of papaya and 4,500 pounds of fresh herbs, processed by Kumu’s 25 full time employees. That produce travels to the U.S. west coast and even as far as Chicago.

Another 40 percent of Kumu’s revenue comes from herbs like basil, thyme, rosemary and dill. After harvest, the herbs are shipped to restaurants and retail markets around the country. 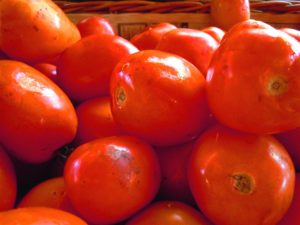 The last 20 percent of their crops are sold at the farm market, open Tuesday through Friday, 9 a.m. to 4 p.m. Customers will find a colorful array of fresh produce from lettuce and kale to carrots and tomatoes. The retail venue, developed by Vinciguerra, offers both food and education.

Making a Difference
“One of the most rewarding parts of my job is growing something new like kale,” said Vinciguerra. “I share info about it then customers come back and buy more and say they like it.”

Having a local impact is one of the things Vinciguerra, a native of Italy, is best known for. Along with generously sharing recipes for healthful cooking, she sees to it that Kumu donates thousands of pounds of fresh produce regularly to local organizations like Na Pu`uwai, Ka Honua Momona, Ke Ola Pono No Na Kupuna senior program, and Maui/Molokai Food Bank.

“[Kumu Farms]… always donate many, many dollars and pounds worth of other produce,” said Lynn Curtis, agency relations coordinator for the Maui Food Bank, which distributes food to Molokai monthly. “They do that because of their commitment to providing beautiful fresh organic produce to the most needy people in the community.”

“If each business would give some, the world would be better place,” said Vinciguerra.

Recognition
Nominated for the Mayor’s Exceptional Small Business Award (11-25 employees) by Robert Stephenson of the Molokai Chamber of Commerce, Vinciguerra said she found out about the nomination last minute and scrambled for letters of support in the community.

“I was embarrassed to ask,” she said. “But within one hour, the community wrote all these beautiful letters. That meant almost more than the award itself.”

“Without their kindness and support our workday meals wouldn’t be the same,” wrote Malcolm Mackey on behalf of nonprofit fishpond restoration organization Ka Honua Momona. 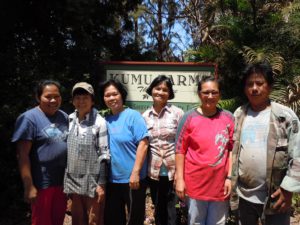 When Kumu was announced as the winner during the ceremony on Maui last month, Vinciguerra said she couldn’t believe it. “This award is for the farmers who work in the field every day,” she said.

“Through their leadership and vision, Grant Schule, Manu Vinciguerra and their team of farming professionals have become the true example of ag co-existence we have here on Molokai, all farmers working together for the success of agriculture,” said Stephenson in a statement.

The Edible Hawaiian Islands Magazine award — announced in their Spring 2012 issue – was also based on consumer feedback. Kumu Farms was “chosen by our readers” as their favorite farm in the state, according to Sales Director Dania Katz.

“I think what Kumu Farms is doing is pretty extraordinary,” she said, noting their quality produce and support of local families through the farm. 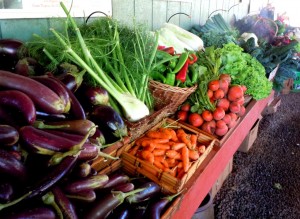 Despite the success Kumu Farms has enjoyed, they, too, face a daily struggle against the economy, water shortages, crop damage from deer, and many other challenges.

About nine months ago, Kumu Farms broke ground on a 20-acre satellite farm on Maui, currently used mostly for herbs. Schule said the move is not so much an expansion of operations but a business necessity.

Perishable crops like herbs can be more easily and economically transported from Maui, and the local retail market is also more viable there, according to Schule.

“We’ve run out of [exporting] options on Molokai,” he said, citing factors like rising barge costs and water shortages. “We owe our past to Molokai and will continue to grow food here. We sincerely wish we could remain a productive commercial farming operation on Molokai… but times have changed.”

Vinciguerra added that supplementing the Molokai farm will ensure that Kumu can continue to “provide the [Molokai] community with healthy food year-round.” She said during tourist season, the farm has about 60 customers per day, but that drops by about half during the spring and summer.

“Either we lose out in the competitive game or we move out to a better market,” said Schule. “Adaptability is how we survive.”