January and February are months that highlight the theme of peace for two reasons:

Makahiki Games and Dr. Martin Luther King Jr. Day.  During this time, in the Kualapu`u School library, students in Kindergarten through sixth grade learn the art of writing peace poems. 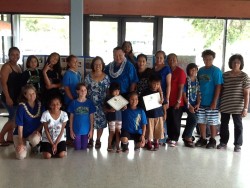 This year, all the poems were submitted to the statewide 16th annual Dr. Martin Luther King Jr. Peace Poem Contest, organized by the International Peace Poem Project in Maui. In Maui County, 22 Kualapu`u School students were proud winners of first and second prizes and were invited by Mayor Alan Arakawa and his wife Anne Arakawa to receive their awards at the awards ceremony on Maui.

Travel expenses were paid by The Friends of Alan Arakawa. We are very grateful to Mrs. Anne Arakawa for coordinating the ticket purchase and travel arrangements! This trip would not have been possible without her help. We are also grateful to Roberts Hawaii for providing free round trip transportation from Lahaina to Pukalani.

Congratulations to all these young peace poets, let’s keep planting and nourishing the seeds of peace!