Friday, May 5th, 2017 By Community Contributed 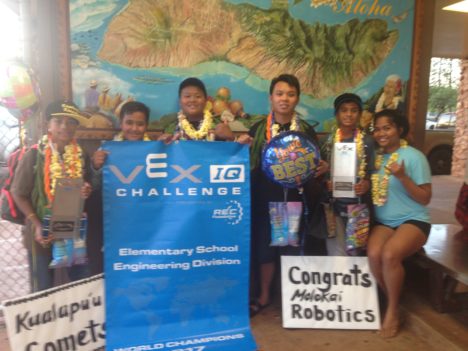 For the first time, Kualapu`u School’s VEX IQ Robotics Teams 1037A and 1037B competed at the 2017 VEX IQ World Championship on April 23 in Louisville, Kentucky. The international competition consisted of 272 champion teams from over 30 countries from around the world. Coming out with a second place finish at the World Championship, the Kualapu`u Comets far exceeded expectations – being that this was their first ever Worlds appearance.

The competition started off with the Robot Skills challenge, where each team tried to score as many points as they could in both a one-minute driver skill challenge and one-minute autonomous programming challenge after which both scores were combined. Team 1037A, students Aron Corpuz and Jaryn Kaholoaa, placed 40th out 272 teams with a combined score of 102 points.

Next began the Teamwork Challenge, where all competing teams were split into four different divisions: Science, Technology, Engineering, and Math. Each division consisted of 68 teams each. Team 1037B, students Naiwa Pescaia and John Quintua-Salavea, who were in the Engineering division, finished the qualifying rounds as the number one seed. In the finals rounds, they paired off with the second seeded team 1140X Discobots of Brampton Robotics Education from Canada, the defending world champions. Together, they won the Engineering Divisional World Championship with a high score of 93 points and advanced on to the World Championship Finals.

In the World Finals, six of the top alliances (four divisional champions and two wildcard alliances) competed for the most prestigious prize on the world’s largest robotics stage for elementary students. With thousands of people watching, the Kualapu`u Comets along with Brampton’s Discobots toppled their own high score with an impressive 94 points. This score was only surpassed by Chinese teams 68A and 15472A, who put up a whopping 99 points – higher than even the winning score for the middle school division.

We would like to thank all of our sponsors: the Maui County Farm Bureau, Stacy Crivelo, the Molokai Island Foundation, Barbara Haliniak, Rawlins Chevron, Makani Kai Air, Beverly and Dale Pauole-Moore, all of our GoFundMe donors, and everyone who made private donations. A special thank you to the parents of these students, who have worked tirelessly and invested in their children’s futures. We would also like to thank Molokai Middle School Coaches Kumu Kaeo and Kumu Kahoiwai Kawaa for continuing to host the Molokai VEX IQ League and making it possible for all of our elementary schools on island to compete in VEX IQ Robotics.