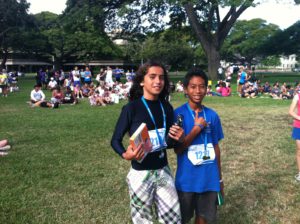 As Coach Matt Helm stated after the race, “The kids really did a great job this weekend and represented their island well. They should be proud of their results considering the size of the field.” Over 1,400 runners participated this year.

Molokai’s event organizers would like to thank our extended Molokai community for their support. On Oahu the runners were fed and given the use of a van by our Molokai ohana: Tony Negrillo, Ben Balete, Jadelyn and Bo Pontes. Without their support and the ongoing support of Molokai’s running community, this trip would not have been possible. Mahalo.