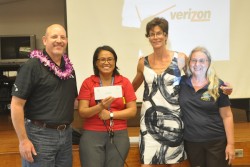 The grant will be used by the charter school’s math and science curriculum coordinator Sue Forbes to train the school’s third grade teachers in hands-on science instruction in the areas of gardening, health and fitness.

“I hope this engenders a love of science in teachers and students,” said Forbes, who will be designing lessons and tests that align with the Next Generation Science Standards. “We will build a curriculum that involves STEM [science, technology, engineering and math.] Right now we are weakest in the physical sciences, engineering and design.”

“We are trying to build a sustainable, relevant science curriculum,” said Trinidad. 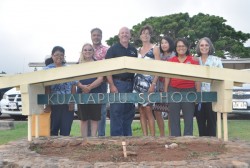 Because of the state’s emphasis on improving math and reading tests over the past few years, science instruction has been lacking, she said. With the school’s “good standing” status after several years of demonstrated proficiency on the Hawaii State Assessment tests, Kualapu`u can now begin to expand in other areas, according to Trinidad. If the science curriculum proves successful, the plan is to expand it into the fourth grade next year, followed by fifth and sixth grades in subsequent years.

“We will be reaching out to all our partners to make this work,” said Trinidad. “This is one of our small but potentially ambitious efforts.”

Kualapu`u was selected from schools in Hawaii and the west coast for this Verizon Foundation grant. Although Hozey was not directly involved in awarding the grant, he was impressed by the school and its staff.

“When I met her [Trinidad] she was engaged, passionate and driven,” said Hozey. “You don’t see that a lot. With Sue [Forbes]’s enthusiasm and passion, this is a good investment.”

Hozey said he sees the grant as a win-win for Verizon and Kualapu`u, and with 86 percent of Kualapu`u’s students receiving free or reduced lunches, Hozey also saw the immediate economic benefit.

“They [the students] are impacting our world,” he said. “These kids will be our engineers and scientists, our leaders.”

Hozey also announced that Kualapu`u could receive 20 to 30 new iPad tablets as part of this pilot project. The iPads would be set up to only allow students to access research, science and math websites. At this time, he said he is “95 percent” sure they will get the iPads.

This partnership could additionally involve Verizon arranging for a free technology forum for the community. This would allow parents and other community members to learn about the latest communication technology and how to safely navigate the increasingly complex world of the Internet.

This year, Kualapu`u — the largest elementary school on Molokai — celebrates its 10th year as a conversion charter school. The school plans to roll out a five-year fundraising campaign this year to develop a school endowment to help continue funding of programs such as its pre-kindergarten and Extended Learning Time initiatives.