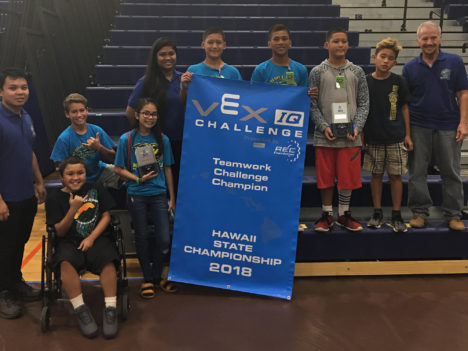 All three teams performed strongly in the qualification rounds, landing them all in the finals which consisted of the top 18 scorers. The finals were nail-bitingly close, as second through fifth place all scored within one point of each other. Team 1037A along with their partners from Keaau placed eighth with a score of 153 points and 1037B with their partners from Manoa placed fourth with a score of 198 points. Finally, 1037C with another team from Manoa won the Tournament State Championship with a score of 206 points qualifying them for the World Championship!

Team 1037B also took home the “Think” Award which is given to a team with effective programming, with a current season high score of 106 points which is fourth in the State. With a skills score of 252 points, 1037B took second in the state and also qualified for Worlds! Skills scores are done with a single robot, unlike tournament scores that are done with two robots working in unison.

We would like to thank all of our current sponsors — Dow AgroSciences, Kamehameha Schools (Maka Cobb-Adams and Andrew Samson), Molokai Island Foundation (Barbara Haliniak) and the Molokai VEX IQ League.

We are currently fundraising for our travel to Worlds and have a goal of $16,000. If you would like to donate, please contact Kualapu`u School, or you can donate online at gofundme.com/kpuuworldrobotics2018. 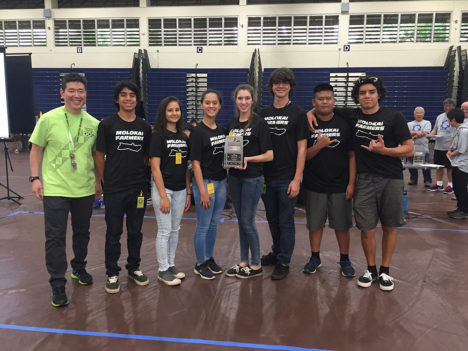 On the high school side, the competition featured the top 46 teams in the state of Hawaii. Three teams from MHS competed, Team 1037A — Makani Davis, Kamalu Kaawa-Richardson, and Cobra Curtis; Team 1037B — Evelyn Haase and Ilima Kaawa-Richardson; Team 1037C —  Maria Angst and Randall Cabreros.

Team 1037A placed fourth at the conclusion of the qualification rounds with a record of five wins and one loss, while both teams 1037B and 1037C fought through some adversity when alliance partners did not show up for matches.

The Molokai High School Robotics Team was awarded as a whole with the Teamwork Award, with 1037A also being awarded with the Amaze Award, which is judged award given to “A team with an amazing, well rounded and top performing robot.”

Molokai has once again qualified for Nationals but will not be attending this season.

We would like to thank and recognize our sponsors DOW Agrosciences, Kamehameha Schools (Maka Cobb-Adams and Andrew Samson), Monsanto Hawaii, Friends of Hawaii Robotics, Kina`ole Foundation, Maui Economic Development Board, and Molokai Island Foundation for making this tournament possible for us.

Please contact Coach Edwin Mendija at edwin_mendija@molokai.k12.hi.us if you are interested in becoming a sponsor of Molokai High School Robotics.