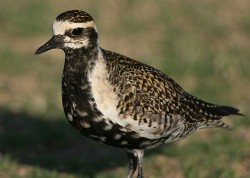 Koloma Smith reported the return of the kolea at Kilohana School at 10 a.m. on Aug. 6, marking the beginning of the fall migration of the Pacific Golden Plover (Pluvialis fulva). Koloma won the 18th annual Krazy for Kolea Kontest and earned a Kolea Research Hawaii T-shirt from the Hawaii Audubon Society and a gift certificate for one scoop of ice cream at Kamoi Snack-N-Go.

The kolea is a swift flying shorebird and has been clocked migrating at 118 miles per hour, although an average of 56 to 60 miles miles per hour is more typical. Females are first to leave breeding grounds in Alaska, with adult males arriving by the end of August and juveniles in October. The species is long-lived (25-plus years), and birds annually return to the same territory on winter grounds. Kolea on their northern migration may have aided ancient navigators with the discovery of the Hawaiian Islands, and the bird figured prominently in Hawaiian folklore; it was considered to be the embodiment of the god of healing, Koleamoku, and a messenger of high chiefs.

The second place kolea was observed at the Molokai Land Trust’s Mokio Preserve by visitor Hannah Nevins, a seabird biologist with the American Bird Conservancy, and third place kolea was seen by Sarah Yerhot at Kalamaula Mauka. Other winners were Kawela resident Doug Beijers, Helen VonTempsky, Butch Haase and Nadine Powell (tied for sixth place), Lily Jenkins, Sasha Ritte-Guerrero and Clay English (tied for eighth place), Rich Young, and Stai Falealii. Mahalo for participating in the 18th annual Krazy For Kolea Kontest.  All winners call Arleone at 553-5992 to receive your Kamoi Snack-N-Go ice cream gift certificate… and have a great treat with your kolea!