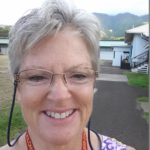 At Kilohana Elementary School, the principal’s new office occupies a space that used to be the maternity ward of `Ualapu`e Hospital.  For incoming principal Terri Simms, it’s a sign of a fresh, exciting start.

Simms, who ran a hospital while in the Army, is now leading the little elementary on the east end, after former principal Richard Stevens retired in May.

While Simms is a newcomer to the Molokai school system, she’s been working within the Hawaii Department of Education’s “Canoe Complex,” which includes Molokai, Lanai, Hana and Lahainaluna, for 12 years.

“She’s not brand new to administration,” said Complex Area Superintendent Lindsay Ball. “… She’s fresh and she’s energetic, and she’s got mapped out in her head what she wants to do for the school.”

Formerly the vice principal at Princess Nahi`ena`ena Elementary School on Maui , Simms originally hails from Tennessee and has nearly 20 years of education experience. After serving in the Army as a medevac pilot, she became an educational assistant in 1996. She taught in Italy for a year before returning to Tennessee to be a special education teacher. Her family moved to Maui in 2004, where she worked at three different schools before coming to Kilohana.

Simms, who has visited Molokai for school conferences and sailing trips with her husband, said the community has been welcoming since she assumed her new position on July 13.

“Being in a small community we’re kinda isolated from town, and everybody’s just been very supportive,” she said. “[They tell me] where I go to get things, where do I get things done.”

As principal, Simms plans to return the aloha. Monthly activities involving the community will be a staple of the school year. They’ll continue the annual Thanksgiving Turkey Trot and Grandparents’ Day and add events like a Sweetheart Picnic around Valentine’s Day, or “Muffins for Mom” and “Donuts for Dad” around Mother’s and Father’s Day.

“My focus this year is to be an ohana,” said Simms. “… We do whatever’s best for our students, as we would for our family.”

Students and faculty start each morning together as a family would, said Simms. They’ve restored the tradition of jointly reciting the Oli Mana`e , which describes the beauty of the east end community, and they hope to add more oli as the year goes on.

Along with maintaining Kilohana’s culture, Simms plans to continue Kilohana’s streak of academic excellence. Despite state budget cuts, said Simms, Stevens worked hard to help the school succeed during his five-year tenure. Under Stevens, the elementary earned frequent recognition with the DOE’s Adequate Yearly Progress (AYP) program, which ranks schools by their test scores. Last year they received a check from the DOE for $15,000 for ranking within the top five percent of Hawaii public schools in the DOE’s new Strive HI program, which reviews overall school performance.

“He tried to provide for school as best he could even while the money was evaporating around him,” said Simms.

She added that his emphasis on technology helped the school thrive and she feels it will continue to be an important component of Kilohana education.

“We gotta work hard to stay at the top,” she said. “… I think we need to be even more focused on technology and try to tap into the professional learning community (PLC).”

Through the PLC program, said Simms, Kilohana students can connect with schools from around the country to learn about the world outside their own classrooms.

Princess Nahi`ena`ena Elementary Principal Lynn Kahoohalahala  said that Simms always brings positivity to her job. During Spirit Weeks at her former school, Simms “was instrumental” in getting teachers to dress up and join in the festivities.

“She has a great sense of humor, lots of fun,” said Kahoohalahala . “… The best quality that I enjoyed when I worked with her is that students and family interests are at the center of her educational philosophy.”