Acey Reyes knows how to steer her steer. At 11 years old, this 4-H member raises cattle for showmanship and market competitions. Her most recent exhibition was last weekend in Kaunakakai at the annual 4-H Livestock Expo.

Saturday afternoon she sat in the pen with her steer, nerves racing before she took him into the ring for the showmanship competition. Acey’s companion, Chuck, a Brangus Cross, is eight times her size. She had to guide the animal through the small ring alongside two other competitors’ steer, all while being watched and judged.

“It takes confidence,” said Acey. “You have to work with the animal and make sure he’s tame enough to compete. You have to brave enough to handle the steer.”

Despite the nerves and pressure, Acey said the Expo is her favorite thing about being involved in 4-H. She loves spending time with Chuck, who doubled his size since his December weigh-in. 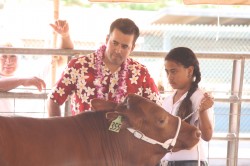 Acey Reyes and Chuck compete in the Showmanship competition as a judge from California looks on.

Acey was joined by about 30 other 4-H competitors at the Expo. These young livestock enthusiast showed their steer, swine and goats in competitions, with experts from California serving as judges. The event also included meat cutting demonstrations, food vendors, livestock auctions and live entertainment.

While Acey was preparing for her big competition, 8-year-old Angelo Duvauchelle and 7-year-old Keilana Duvauchelle were spending time with their two goats, animals that are closer to their own size.

“They are our best friends,” said Keilana, whose goat Darli has put on three pounds since her first weigh-in 93 days ago. “It’s good to work with the animals and feed them and take care of them. I like walking and washing and feeding them.”

As Angelo talked about competing, his goat kept tapping him, trying to get his attention. There was a bond between the two, but still Angelo remembers his purpose in raising livestock.

“When 4-H is done, we’re going to sell it and have money to buy stuff we want,” Angelo said. Until then, they enjoyed their animals’ company. Plus there are other benefits in competing at the Expo, which featured vendors selling goods or providing information.

“My favorite thing about the 4-H is the Expo,” said Keilana, “because I get the Mocha Mommas [from the Coffees of Hawaii booth]. They’re what I look forward to.”