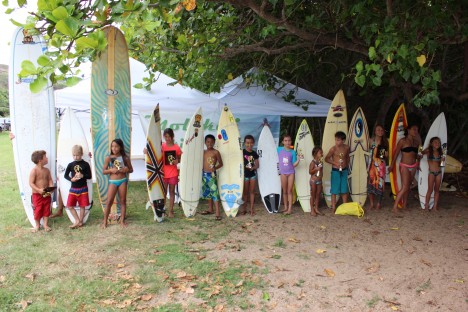 Keiki surfers took on the waves and competed in fun heats at Waialua Beach last Saturday. They surfed their way through the day with the sun shining, cool winds blowing and light waves crashing to the shoreline, for the last Molokai Keiki O Ke Kai surf meet of the summer.

The meet, made possible through funding provided by Friendly Isle United Fun, was part of the 25th Annual drug and alcohol-free Keiki Surf Meet Series. The event gives aspiring surfers age 13 and younger the opportunity to compete and have fun learning to surf.

“I like surfing because I like having fun,” said 9-year-old Syrus Tancayo. “Each year I’m getting better and next year I want to win first place.”

Tancayo is in the 9-to-10-year old division. He said he can swim good, paddle on the waves and stand up on his own board since starting surfing with Molokai Keiki O Ke Kai two years ago.

For Kelsey Bicoy, 13-years-old and in the highest division, 11-to-12-years-old, the surf meet is all about having fun and proving you’ve worked hard, she said.

Bicoy has been surfing in the programsince she was 6-years-old and said practice helps her succeed.

“I have potential and know how to read the waves good,” Bicoy said. “I really like to surf.” 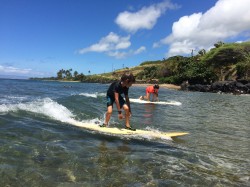 About 50 keiki from two to 13-years-old, paddled out into the water to surf in each series. While some early learners concentrated on standing up on their boards, the more-experienced bunch displayed their surfing tricks. Ohana, friends and community members helped keiki, related or not, catch the best waves one after another.

The judges, all well-seasoned surfers, critiqued the surfers on the overall length of the ride, the control the surfer has and being able to predict what’s happening on the water. Surfers were scored on a 10-point scale, with 10 being the highest.

“We score style over tricks,” said Judge Jeff Parrish. “Overall in surfing it’s your style and control that’s going to be the winning factor.”

Parrish has been serving as a judge for 22 years and said “the biggest prize is the kids are having a lot fun with their parents and all the other kids.” Every participant went home with an award. 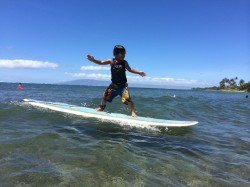 The Keiki Surf Meet aims to implement good sportsmanship, teamwork and coming together as a family. The family-filled day prohibits drug and alcohol on the premises and creates awareness of abstaining from them in the community, said Meet Director Malia Waits.

The last meet of the summer closed with a potluck lunch and awards ceremony afterwards.

“It’s definitely a cultural significance and the purpose is to perpetuate the sport itself and to encourage younger generations to come out,” Waits said. “We’re encouraging the right things, instead of pointing out the wrong. It’s about getting out here and joining together as a community.”