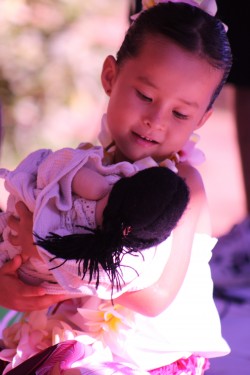 From sand to sea, Molokai’s keiki were entertained by ocean-themed activities while parents learned about family resources in our own backyard during the Keiki Expo’s 10th anniversary Saturday morning.

“It really takes a whole village to raise a child,” said event volunteer Liz Luan. “This has been an awesome highlight our great resources here on Molokai.”

The family event, brought to the community by the Molokai Keiki Group, was held at the Mitchell Pauole Center and featured more than 25 organizations focusing on educational, health and safety programs for young children, prenatal to five years old.

“[Over the last 10 years] our focus has been kept strictly to services we can get on island and also provide an activity for the kids,” said Keiki Expo co-organizer Becky Takashima. “We want to have it fun for the keiki at the same time the parents are getting the education.”

At each organization’s booth, kids could craft and parents could inquire about literacy programs offered at the Alu Like Library, proper keiki car seat guidelines from the Maui Police Department, how to sign up for Molokai Little League, and support programs for expecting mothers.

“[Parenting] starts at the womb and my purpose is to let families know that we have services starting at prenatal,” said Seanalle Luafalemana, a parent educator for Ho`ala, a program guiding parents on healthy births and early childhood brain development.

Families were also able to take keiki ID photos ,as well as register for pre-kindergarten.

“I brought [my daughter] to sign her up for preschool,” said attendee Leah Kaohulo. “We’ve been going from booth to booth, doing some crafts. It’s a fun day for the family.”

This year, keiki received books teaching them about ocean creatures.

“Literacy has always been a big point of this event and this year we decided to focus on something that’s right here, which is our resources surrounding us,” said co-organizer Lori-Lei Rawlins-Crivello.

Other ocean-related activities included a kid’s practice area for casting-off a fishing line and even a live aquarium display filled with a variety of fish, squid, shells and corals.

“We’ve got an awesome treasure of resources right in our backyard,” said Rawlins-Crivello.  “The live display…is for some of the kids who maybe don’t have a chance to see it.”

Rawlins-Crivello and Takashima have been the head coordinators for the Keiki Expo over the last decade. While this marks its 10th year anniversary, they said this year’s expo might be the last.

“I think people look forward to this every year but it takes a lot of time, a lot of hours, a lot of collaboration and coordination,” said Rawlins-Crivello. “I think I need to have a little bit more focus on my own family time.”

However, both organizers said they see the necessity for the Expo to continue next year and they hope another group or organization will step forward to take it over.