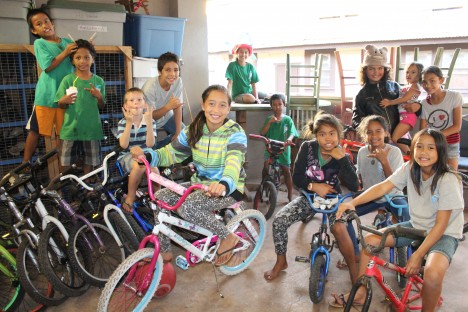 Kids at the Youth Center are picking up free bikes and mechanic skills along the way. Photo by Colleen Uechi.

“I like to use a screwdriver when I do it,” he said matter of factly. “When you’re unscrewing that, it gets loose, so you push it up, take that off…” He continued to rattle off several steps with ease.

It’s just one of the many handy skills that Hanchett-Lopez and the kids at the Molokai Youth Center have picked up since the Center started repairing bikes for free nearly a month ago.

“There’s something magical about a kid and a bike,” said Youth Specialist Travis Ritte, who repairs bikes at the Center. “The feeling that you can go anywhere. There’s a lot more you can do … with your day.”

Ritte, who’s been working at the Center since 2009, first dangled bikes in front of the kids to lure them away from electronics.

“I notice everybody now likes to be on the computers or video games,” said Ritte. “So I brought my bike down here and everybody wanted to borrow it.”

After that, Ritte said, they decided to start fixing bikes. Models originally destined for the junkyard have instead come in as donations and turned into a popular afterschool activity for the kids. Ritte, fellow bike repairman Patrick Toledo and Molokai High School senior Luke Kikukawa repair donated bikes for use at the Center and offer to fix families’ broken ones for free. If someone can’t bring in a bike, they take a truck down to pick it up. Most of the money for parts comes out of their own pockets.

They’ve also been passing on their skills to the young riders. Kids as young as 8-year-old Ka`ala DeCosta and 9-year-old Justine Agcaoili said that they can change tires, fix broken chains and clean the bikes. Hanchett-Lopez added that he’s learned how to mend inner seals and repair bike tubes.

“It’s fun so that when I get a future bike, if it breaks, I can fix it,” said Hanchett-Lopez.

Ritte said he enjoys seeing the kids fiddling with the bikes. 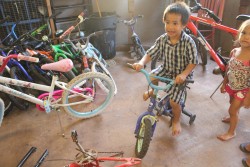 “The first time I gave them my tools and said ‘Ok, go change the tire,’ and they went out and they did it and I didn’t help them at all. … That was my favorite part,” he said.

So far, they’ve repaired 22 bikes. Next month, they hope to organize on a bike ride from the Center to One Alii Park, where they’ll have games and give away bikes to any kids who want them.

After school, it’s first come first serve for the bikes. Mikaelynn Asuncion, 10, said she likes “spending time with my friends and cooling off” on bike rides. Some kids borrow the bikes for trips to the store, the park and occasionally home. On Saturdays, they gather in the park for races. The kids have picked up on the feeling of freedom that Ritte said he enjoys about riding.

“You can pedal instead of running,” said 9-year-old Kaililauokekoa Asuncion. “Sometimes when you pedal fast you can let go and just ride.”

The Molokai Youth Center is open six days a week and offers multiple cultural, physical and educational programs for kids from ages eight to 17. Ritte said anywhere from 30 to 100 kids can pass through the center on a typical day.

“They get really excited. It’s something to look forward to,” said Youth Specialist Nue Apiki. “They have so much energy. Using it to ride bikes helps [use that energy].”