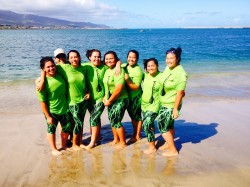 “We’re standing a hair ahead everyone [in the league],” said coach Tania Kaholoa`a. “These girls have been together for a few years…now is their time.”

Molokai placed second in their first race of the season earlier in December at Ka Lae Pohaku. Finishing six seconds behind Seabury—almost a boat’s length of time, according to Kaholoa`a. She said she noticed the girls were paddling hard but not smooth, causing the canoe to nod in the water.

“They get so excited as the flag goes down, they just start to throw their bodies forward, slam their paddles forward and pull with all their might,” said Kaholoa`a. “We took away all the bouncing movement and focused more on the twist of the body than throwing it forward.”

Kaholoa`a said since Molokai has shown what they can do in competition, now they need to continue working hard in and out of the water to protect their standing.

“We haven’t stopped practicing because once you win…[other teams] watch everything you do,” she said. “We cannot let our guard down and we need to try to stay up there.”

The Farmers will compete in three more MIL races with the top three teams moving on to state championships. The next race will take place this weekend, once again at Kahului Harbor.

“If we come in first or second in the next race, we’re guaranteed to go to states,” said Kaholoa`a. “But we just want to strive for a good record.”