Waste at the settlement up 50 percent from previous years 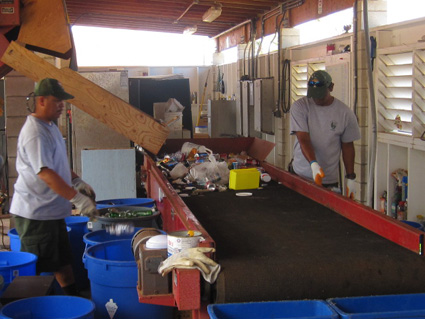 The amount of solid waste exported out of the Kalaupapa settlement is estimated to near 41,000 pounds by the end of September, increasing almost 50 percent from last year’s 27,000 pounds of trash.

Park officials suspect the reason for this upsurge is the increase of guests and visitors, according to Arthur Ainoa, the National Park Service’s (NPS) Grounds and Recycling Supervisor. At the monthly community meeting last week, he said many guests to Kalaupapa are unaware of the recycling and composting program, dumping all their waste into one trash pile instead of sorting it per the program’s policy. Unsorted waste –or trash with recyclables and food waste –weighs about 50 pounds and costs $41 per bag to ship out, while sorted waste weighs about 12 pounds and costs less than $10 to ship.

“We’ve slipped a little bit on our community’s commitment to recycling this year,” said Steve Prokop, superintendent of the Kalaupapa National Historical Park. “Hopefully we could get back to where we were, at least.”

How it Works
Before the peninsula’s recycling and composting program started in 2010, all of the settlement’s trash was dumped into a municipal landfill located near the trail entrance outside of Kalaupapa. The landfill closed in early 2010, and now nearly all of Kalaupapa’s trash is transported by air to facilities on Oahu.

According to Ainoa, the recycling program at the settlement is a single-stream recycling program, meaning all recyclables are mixed in a collection truck, which may result in greater processing costs but is ultimately much more efficient. Currently, the settlement recycles cardboard, certain types of plastics, mixed paper, tin cans, glass, magazines, plastic bottles and aluminum cans. The recyclables are collected and stored in preparation for the annual barge.  NPS ships out three cargo containers, each 20 feet long, of recyclables annually to recycling facilities on Oahu, according to Ainoa. 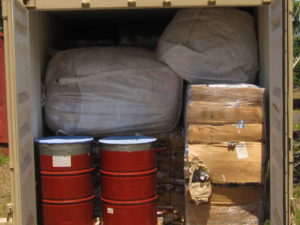 Bales of recyclables are compacted, stored and then shipped out via barge to processing facilities on Oahu three times a year. Photo courtesy NPS.

The composting program involves the collection of food scraps. Each household is issued tubs for food scraps, old produce and expired goods. These scraps are delivered to the settlement’s composting site, combined with woodchips and added to the Earth tub, which mixes the materials constantly. The composting process takes 120 days, after which it is used by NPS’s Nursery for the restoration of native plants and within the community garden.

Remaining waste that is neither recyclable nor compostable fall under the category of trash. Trash is collected from residences and processed using a trash compactor into bales weighing 40 to 60 pounds. They are then delivered to the airport twice a month and picked up by Kamaka Air, who delivers the bales to H-Power, a processing facility on Oahu.

Spreading the Word
This year, Kalaupapa has seen an increase in guests and visitors, in large part due to the trail being reopened after the upper bridge collapsed in 2010, as well as Makani Kai offering significantly reduced airfare to the settlement, according to Ainoa. Many of the settlement’s visitors are not aware that they should sort their waste according to the recycling and composting program, and Ainoa urges residents to educate their guests on separating food wastes, bringing only recyclable materials and leaving with what they came with.

“This is our community, and we’re an example to the state,” said Ainoa. “Based on numbers in the past, our numbers [of recycling] are way [ahead of] the rest of the state and we should be proud. Nobody in the state of Hawaii does anything close to what we do.”

One Response to “Keeping Kalaupapa Beautiful”