Keeping an Eye Out for Keiki

As Child Abuse Prevention Month began at the Molokai Public Library last week, groups of kids wandered around the lawn with shiny blue pinwheels, chatting and smiling with friends and family. For organizers of the event, it was the kind of childhood they hoped to promote for all island keiki. 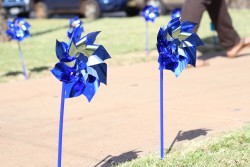 Bright pinwheels lined the sidewalk by the library at Thursday’s event. Photso by Colleen Uechi.

About 50 community members gathered at the library to plant pinwheels and flags to raise awareness and promote prevention of child abuse and neglect.

“It’s always fun to be a child,” said Anella Saito-Takabayashi, who works with Catholic Charities Hawaii and the Ho`oikaika Partnership, a coalition of 40 child abuse prevention agencies in Maui County. “[The pinwheels] remind us of children, of fun, about what their lives should be. They should be allowed to be children without having any violence in the home.”

This year marked the eighth year of pinwheel planting in Hawaii, though Saito said the tradition only started in Maui County two years ago. At the Capitol Building lawn on Oahu, more than 5,000 pinwheels were planted this year.

At Molokai’s event, representatives from the police department came to plant pinwheels and read the mayor’s proclamation designating April as Child Abuse Prevention Month. According to the proclamation, “once every minute, a child somewhere in America is abused physically, sexually or emotionally.”

Andrea “Titi” Hernandez, office manager for Child and Family Services, said that “the more people know, the better [off] we are on the island.”

“Just by being educated, spreading the world about the effects of it,” said Hernandez of ways people can help prevent abuse and neglect. “Just being maka`ala. Everybody just gotta look out for each other, and I think that’s how we’re gonna help the situation.”

The event capped off with a free family concert with Honolulu-based children’s band Uncle Wayne and the Howling Dog Band, who had kids shouting along to lively tunes. Cousins Jerico Adolpho, left, and Tiler Hernandez play with pinwheels at the start of Thursday’s event.

Saito-Takabayashi said that there are five protective factors that can help counter the risk of child abuse and neglect in communities: knowledge of parenting and of child development, parental resilience, social connections, concrete supports for parents, and developing social and emotional competence in children. They all have to do with educating parents and equipping communities to support their keiki, she explained.

“Maybe you see a parent who’s having trouble at the grocery store, offer assistance. Maybe you offer a friend a little bit of time for child care so they can get some errands done,” said Saito-Takabayashi. “All of those things help to build in solid foundations for parenting skills and for social connections.”

Twelve-year-old Lehiwa Ritte encouraged kids experiencing violence at home to not be afraid of turning to adults for help.

“Kids think they might get hurt more if they tell someone,” she said. “They shouldn’t be scared. Just tell someone.”

Her mom Mercy Ritte added that it’s important for kids to form trusting relationships with their peers and be on the lookout for anything “that’s not pono” and know where to go. One such place is the Consuelo Foundation, which provides abuse prevention programs and support in Hawaii and the Philippines, and Child and Family Services, which offers counseling, support and parent education programs.

“It’s important to bring light to this issue and support our children,” she said. “… If we’re not speaking out or telling someone our children suffer.”