Keeping an Eye on the Algae 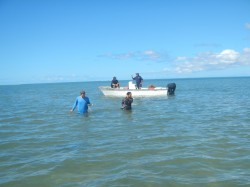 On a fishing trip along Molokai’s south shore in late July, fisherman Clay Ching noticed something strange. Huge masses of thick seaweed blanketed the shallow flats near Coconut Grove, protruding from the surface and covering hundreds of square yards in several large patches. As owner of local charter fishing company Hallelujah Hou Fishing and having spent decades trolling the area, Ching called it “epic proportions of growth” and said he’d never seen anything like it.

The algae invasion concerned him so much that he notified the Department of Land and Natural Resource (DLNR)’s Division of Aquatic Resources (DAR).

“[I don’t want] this situation to progress to the point of no return for our precious reef ecosystem which us Molokaiians depend on for food, etc.,” Ching wrote in an email to DAR Aquatic Biologist Russell Sparks. “…I depend on this exact same reef ecosystem for my livelihood… and the value of it should be perpetuated for the future generations…”

Gorilla ogo, the type of limu Ching spotted, is highly invasive with dense growth forming thick mats that  choke out coral and other seaweeds. It is spread by pieces floating to a new location, and also by boaters or fishermen inadvertently transporting it on equipment, according to the DLNR. Found in Hawaii only on Molokai and Oahu, it’s been on the state’s radar for years.

In 2009 and 2010, DLNR’s Aquatic Invasive Species Team made several trips to Molokai and organized five alien algae community clean-ups, resulting in the removal of about 29 tons of invasive seaweed. Gorilla ogo accounted for a large percentage of those pounds. Several sites around the island were targeted for the clean-up, with 17 tons of alien algae removed from Kaunakakai Harbor alone, according to a 2011 DLNR report. At that time, the team also documented the presence of gorilla ogo extending to Pala`au on Molokai’s south shore.

After Ching’s discovery of an influx of gorilla ogo growth in the area, Sparks agreed to plan a trip to see it for himself, along with several fellow aquatic resource experts. The visit was scheduled for Sept. 4.

When the day arrived, however, and Ching took them to the spot, they could find only small remnants of the huge masses of gorilla ogo Ching had documented the previous month.

“Limu is variable,” said Sparks. “It’ll be blooming and everyone is freaking out, and a month later, it’ll be gone… [this growth] was not anchored to the ground – just afternoon winds could push it toward shore.”

He also called this a “bizarre year” for algae, which can proliferate very quickly under certain conditions. One such condition can be warmer water temperatures, which Sparks said this year has seen.

Ching said since he’d last seen the gorilla ogo infestation, Hurricane Iselle had brought strong winds and tides to the area, and he suspected that may have diverted the floating seaweed elsewhere. Another local fisherman agreed. 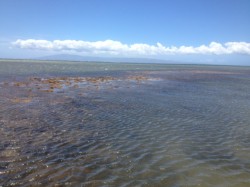 Henry Paleka, who lives along the Kalama`ula shoreline, also noticed the floating masses.

“It looked like another island forming!” he said, but added that he, too, didn’t notice it after Iselle hit.

Even though there was not as much cause for concern as first expected, Sparks and his team took the opportunity to document current gorilla ogo growth to compare to previously-recorded levels along the south shore, west of the Kaunakakai wharf.

Kristy Stone, DAR monitoring coordinator, said there is still a significant amount of invasive algae growing in the area on the ocean floor. She found both gorilla ogo and another species called Acanthophora. The reddish limu has finer growth than gorilla ogo’s thick stems and while it is also invasive, Stone called it “not as bad” as ogo because it does not form the same thick mats.

But the visit also brought good news for Stone. She said she helped with the 2010 clean-up of gorilla ogo from Kaunakakai wharf and before the effort began, she said the seaweed was choking the area.

“It was so thick you couldn’t walk in it, fish couldn’t swim,” she said. Now, she’s thrilled to note that harbor is still clear of the algae four years later.

“I’m amazed at how clean it is,” she said. “I’m not sure why – maybe the hurricane also cleared it out – but I’m stoked.”

She suggested that to maintain it in a healthy state and relatively free of invasive gorilla ogo, those who use the area frequently should pull a little out at a time whenever they notice it.

“Just do a little patch,” she said. “Like your backyard, you gotta clean the weeds.”

“Meaningful control is going to have to come from community,” he said. “We’re happy to work with people for funding and training, but we just don’t have the manpower [to come over to do regular clean-ups].”

State budget restrictions have also limited the amount of work the team can do on Molokai. However, Brian Neilson, aquatic invasive species coordinator for the state, said they will explore what type of funding or grants might be available to continue efforts here.

“There’s an argument to get [gorilla ogo on Molokai] now before it spreads like on Oahu,” he said, where its growth is so invasive that efforts at irradiation have been abandoned. “This is the time to get it [on Molokai]. We could justify funding by its potential to kill the reef.”

Neilson said coming up with a plan, if it happens, would take time – as well as commitment from the Molokai community.

In the meantime, Sparks said monitoring and documentation of gorilla ogo on the island is important. While the influx of growth that Ching reported turned out to be short-lived, Sparks encouraged that type of documentation.

“If people who go there all the time see a change, that’s valuable info,” he said.