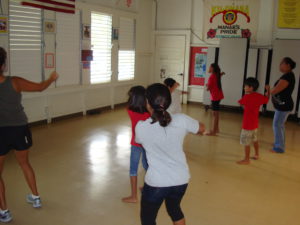 The Kilohana Dancercise class follows along as their instructor Lani Sawyer (on left) gets them moving to the beat.

Like all 21st Century grant programs, the Dancercise class is free and open to anyone who would like to attend. Led by Lani Sawyer, the class is guaranteed to get your heart pumping. Dancercise is a combination of cardio, aerobics, dance and stretching that will leave you feeling energized and a little sweaty. Each class is a little different, and by changing up the routines, the Dancercise class stays fresh and new. Lani uses combinations of cardio and aerobics, to increase your heart rate, and dance step routines, such as the electric slide and the hustle, to make you feel like you are not only working out but having a good time. I have personally attended a few of the Dancercise classes, as I too told myself I would “get fit” this year. I found that by the end of class I am quite sweaty, I felt that I have had a good workout, and am happy that I attended.

Dancercise not only benefits participants by working out, but it also helps with coordination, rhythm and memorization by learning the different dance step routines. The class not only benefits your heart and muscles, but also it exercises your mind. The class plans to perform a dance routine at the end of the year in a showcase that will highlight the different 21st Century grant programs that were offered this spring semester of 2012.

The 21st Century grant is federally funded and provides after school activities for students and adults to help stimulate their minds and, in this case, their bodies too. If you or your children would like to join the 21st Century grant Dancercise class at Kilohana Elementary School please contact Mapuana Dudoit at 558-2200 or Sandra Czajkowski at 658-0609. The Dancercise class is offered on Mondays, Wednesdays, and Fridays from 4 to 5 p.m. and welcomes anyone from any age to participate and have fun while keeping fit and possibly fulfilling that New Year’s resolution. Maybe I will see you there!

Photo Caption: The Kilohana Dancercise class follows along as their instructor Lani Sawyer (on left) gets them moving to the beat.