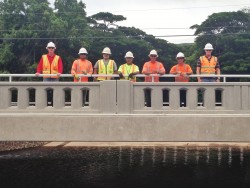 There’s good news for drivers who live on the east end as well as residents of the Kawela area: construction on the Kawela Bridge is finally complete.

The former, 70-year-old bridge was deteriorating, and a $6 million construction project began back in 2012 to remove the original bridge and replace it with what you see today.

The old bridge, constructed around 1940, was clogged with stream deposits which impeded the flow of water below the deck, resulting in flooding in neighboring properties, said Project Engineer at Goodfellow Bros., Inc., Clayton Morrell.

Goodfellow Bros., Inc was contracted to remove the old bridge and build a new one in its place with a capacity to handle high volumes of water to pass beneath the roadway and remove stream deposit buildup that migrates down, Morrell said.

“The bridge is a benefit to the Molokai community,” Morrell said. “It’s great to have the bridge open up and it allows for a steady flow of traffic that connects the island, and prevents problematic flooding to the neighboring Kawela community.”

Goodfellow Project Manager Todd Svetin said a bid for the Kawela Bridge reconstruction was placed in 2011. In March of the following year, clearing work for the new bridge began. The old bridge closed for passing over it on Aug. 14, 2012. A detour road was built to divert traffic around the old bridge, allowing for its removal and construction of the new one, Morrell said. Pavement of the new bridge began in June 2014 and final paving was completed in July.

About 10 main Goodfellow Bros., Inc. crewmen worked on the site until its completion, which took a little over two years. Twelve sub-contractors including GP Roadway Solutions, which installed the guardrails and Apply-A -Line Inc., which painted the lines onto the roadway, partnered to complete the bridge. Molokai’s Tri-L Construction, Inc. supplied all the concrete for the project. Both lanes of the bridge reopened on July 23 of this year. The total project cost $6,290,000 with 80 percent federal and 20 percent state funding.

“We’re very pleased with the completion of the Kawela Bridge,” Svetin said. “Our workers take ownership of the bridge, with many of them being from and living here on Molokai, and have built a quality bridge Molokai can be proud of.”

Next, the crew will relocate to the landfill to excavate the site, making a large pit that will be the base of the fill area and will hold the next six year’s worth of trash that Molokai will produce, Morrell said. At the bottom of this pit a liner will be installed to prevent liquids from migrating below ground. The crew will also construct a channel to surround the outside of the pit and capture storm water run-off. The run-off will be transported to a sedimentation basin near the back of the facility, eliminating sediment erosion problems, Morrell said. The landfill project is scheduled for completion in December, Svetin said.

“As far as aesthetics, the [Kawela Bridge] project turned out even better than we anticipated and with modern construction it will last and serve the community well,” Morrell said.