The call went out on social media and 104 volunteers responded, removing 20 truckloads of marine debris at a Nature Conservancy (TNC) beach cleanup on Molokai.

Kawa`aloa Beach on the island’s northwest coast was the site of the cleanup, which took place on Jan. 13, the morning of the false North Korean missile alert. 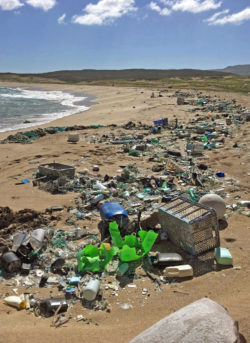 Before the cleanup. Photo by Kahi Paccaro 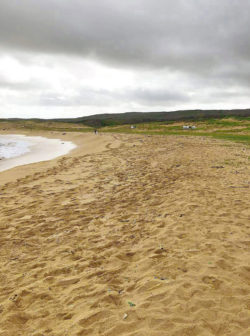 After cleanup. Photo by Kahi Pacarro

The remote, crescent-shaped beach lies adjacent to the Conservancy’s Mo`omomi Preserve and is a hotspot for ocean debris that washes up on shore.  The debris includes plastic bottles and bags, rope, buoys, tires and cargo nets, among other items.

“We cleaned the beach for the turtles,” said Wailana Moses, TNC’s Molokai coordinator for the event. Kawa`aloa is a popular nesting site for green sea turtles. The Conservancy runs a turtle monitoring program there during the nesting season, which runs from May to December.  Monk seals are also frequently seen on the beach and seabirds forage and nest in the area.

On the morning of the cleanup, participants were still arriving when the missile alert went out, with many getting out of their cars, smart phones in hand, asking what to do.

“I told everyone to find shelter in a building,” Moses said. “Most of them went to the high school gym in Ho`olehua. Thankfully everyone remained calm. One of my hardcore volunteers told me, ‘If I’m going to die, I’m going to die right on this beach.’ She grabbed a bag and went to clean the beach. It’s amazing that everyone drove back to Mo`omomi after the all clear message.”

Three hours later, the beach had been swept clean.  Said Moses, “Kawa`aloa looks so beautiful when there’s no rubbish.”

Moses said the volunteer turnout for the event was the best yet.

“A lot of Molokai residents came out, including Mo`omomi resource manager Mac Poepoe. A group from Maui came over on their boat to help.  Another couple flew over from Kauai. And we had a bunch of folks from the West Coast, New York, and even Germany. They were on Molokai when they heard about it on social media,” she said.

All of the trash that is taken off Molokai’s coastlines is shipped to Oahu and the West Coast, where the hard plastics that don’t break down are recycled. The non-recyclable trash is burned for power.

Together with Sustainable Coastlines Hawaii, the Conservancy conducts up to 10 Molokai beach cleanups each year. Moses credits Kahi Pacarro, the group’s executive director, with being a game-changer for cleanup events on Molokai.

Moses said there will be a second beach cleanup at Kawa`aloa Beach in the spring, just prior to the turtle nesting season.