Kanemitsu Bakery, after having been closed for five months, will be open in time for Thanksgiving this year. The bakery’s permit was reinstated today after the facility passed a Department of Health (DOH) inspection this morning. 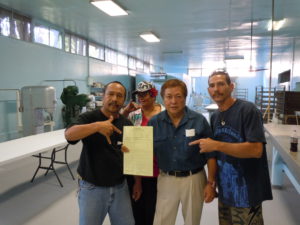 “The improvement is tremendous [since the permit was suspended],” said Peter Oshiro, DOH environmental health program manager, who flew in for the Wednesday inspection.

While most of the violations had been corrected, DOH inspector Dean Kagawa said today he would reinstate the permit based on the understanding that several aspects of the facility, including the floors and some areas of the ceiling, would continue to be repaired. He said his main concern was that the bakery not attract vermin; he said current uneven sections of the floor could hold flour that pests could feed on. Kagawa will return to do a follow-up inspection in three months to ensure the additional improvements have been completed to bring the bakery up to health codes.

Volunteer community members and contractors — about six workers total — have spent about 80 hours making improvements to the facility since the permit was suspended, said Patrick Hiro. He donated his time because he said he just wanted to see the bakery open again.

Open for Thanksgiving
Poepoe said the restaurant portion of the business, which uses a separate, permitted kitchen, has been closed since September because it wasn’t financially feasible to keep it open without the bakery. She said she anticipates the restaurant reopening next month, after the bakery operation is underway again.

Eleven employees have been without work since the bakery and restaurant closure, according to Poepoe. She said they will immediately bring eight of them back to work in the bakery.

“Fingers crossed we don’t run out of bread!” she said today.

The bakery will also be offering Thanksgiving pies next week. The business normally sells full Thanksgiving meals, including turkey, ham, mashed potatoes, stuffing, rolls and more, said Poepoe. They will not be offering the meals this year, but Poepoe said she anticipates a busy week nonetheless.

“I’m assuming people will bombard us for breads and pies,” she said, calling Thanksgiving “our busiest week of the year.”

Closed Five Months
The bakery’s ovens have been cold since June, when an anonymous complaint was filed with the DOH alleging insects and other foreign substances were found in the baked goods, according to the DOH. A subsequent inspection found “serious deficiencies in the maintenance and manufacturing practices,” according to DOH, and the bakery’s permit was suspended.

The DOH came up with a checklist to help the bakery correct sanitation shortfalls with the understanding that whenever all the improvements were completed, bakery owner George Kanemitsu would call the DOH for an inspection. Since then, contractors have been working to install new drywall, paint, resurface floors and tabletops, and rodent- and inspect-proof the facility.

Kanemitsu called for an inspection in September, but when inspectors arrived, they found that not all the necessary changes had been made.

“I really thought they would let me open up and fix it as we go along, but it didn’t go like that,” said Kanemitsu at the time. Rep. Mele Carroll and Maui County Councilman Danny Mateo, along with many concerned community members in support of the bakery, were also present for that inspection.

The bakery’s operations were also suspended for three days in March. A routine annual DOH inspection found similar health violations and the bakery was fined $90,000. Kanemitsu hired an attorney and appealed the fines. A hearing on the fines is scheduled for next month.